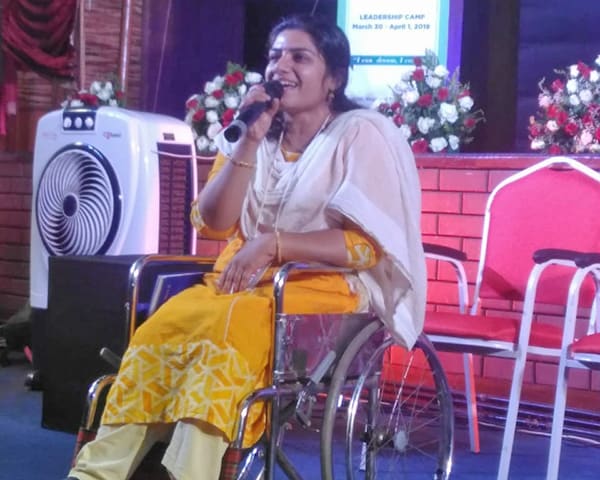 Dhanya Gopinath is an all-rounder and being a wheelchair user has not stopped this 37-year-old from pursuing her artistic dreams.

An theatre actor, Dhanya is part of a group called Chaya, the first theatre group in India run by wheelchair actors. She is also a singer and has performed at various events along with her music troupe, Freedom on Wheels, also a venture by wheelchair users.

Dhanya even runs an Abacus class at home for over 20 children and makes and sells ornaments online and at exhibitions. That’s not all, she is also a coordinator for events at Palliative Care Centre.

Just like any other youngster her age, Dhanya had dreams of completing her education and supporting her family. She was pursuing a course in optometry after finishing class 12 and had plans to take up a full-time job but life had other plans. Dhanya was diagnosed with a tumour on her spine.

After undergoing treatment for tumour, I thought that I will be able to walk. I never knew what was in store for me. Gradually, I realised that I will have to be a wheelchair user for the rest of my life. If not for my relatives and friends, I would never have been able to get back to normal life. They supported me and stood with me throughout by giving me confidence. The first few days were hard. I was even depressed to face others. – Dhanya Gopinath

Dhanya was trying to pick up the pieces again when she attended a camp conducted by a Palliative Care Centre. Here, she met other wheelchair users who were struggling to follow their dreams and passions and Dhanya came to realize that being in a wheelchair may be the start to new journeys.

At the camp, Dhanya met Dr Mathew, one of the organisers, who gave her the confidence to sing. A few aspiring singers at the camp got together and performed Karaoke at a couple of events, which became a huge success. Dhanya realised she had it in her to make a go as a singer.

Her family was supportive of the idea and her father modified a car and urged her to learn driving so she could attend her programmes independently.

“I have now been a wheelchair user for 18 years and it took me a while to realise that being on a wheelchair does not change your life all together”, says Dhanya. “There is nothing that a person cannot do. When you start using a wheelchair, the first few days can be depressing. But it is all about putting the past behind and moving ahead.”

Susheela Gopinath, Dhanya’s mother, has been her biggest pillar of support. She accompanies Dhanya to all her programmes and events and says she finds her daughter’s journey an inspiration.

“Initially, even I used to be sad about what happened to Dhanya. But she gathered all her courage to move ahead in life”, says Susheela. “All that we can do is support her as a family and I’am glad we are doing it. She is a very positive person and loves every bit of what she is doing.