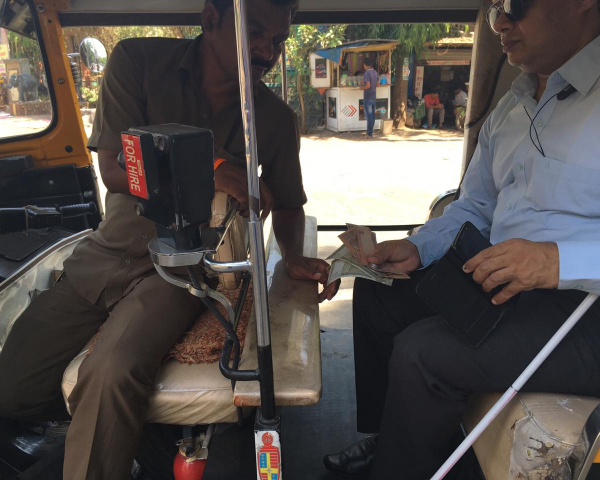 The visually impaired community in India is not able to access the new currency notes as they are inaccessible. This makes cash transactions challenging for around 80 lakh visually impaired people in the country.

The lack of identifiable features such as the dimensions and tactile marks, that can be felt and sensed by blind people through touch have made the new notes a huge headache.

The Reserve Bank of India says it is not feasible to completely remove the new notes from circulation, and has proposed to use technology to fix the problem. It has come forward with the idea of a mobile phone application that can be used to identify rupee notes.

While the move to find a solution, which comes after sustained pressure from disability rights groups, has been appreciated, technology may not offer the way forward says Mumbai-based lawyer Amar Jain.

I will say that it’s one of the ways to solve the problem but it does not address the underlying problem of the physical currency being inaccessible by itself. I do understand the challenge of replacing a large volume of currency notes printed and there is cost involved in everything but at the same time we should take lessons from this and should ensure that at least the future designs of currency notes are accessible for blind people. I don’t think to fix something like this with technology is a holistic approach. – Amar Jain, Lawyer

Technology companies interested in developing an app for currency identification have been asked to submit bids to the Reserve Bank of India.

The RBI has sent out a proposal in this regard that outlines the requirements from the app. The app needs to have features that are accessible and can be used easily by the blind people. Some of the features are:

– The app should be able to identify banknotes of Mahatma Gandhi Series and Mahatma Gandhi New series by capturing the image of the notes placed in front of mobile camera or scrolled across it.

– Should be able to identify the note within a duration of two seconds or less.

– Interface should be available with multi-lingual support or at least Hindi and English.

– Users should be able to find the app in all the app stores using the voice option.

While the app may help some, what about those who do not have access to this technology? asks Vishal Kumar Jain.

Jain, who is a member of BGFI-Blind Graduates’ Forum of India says, most people with visual disabilities in India do not have access to smartphones and have limited opportunities to learn using screen reading technology to operate a phone. “Also, the RBI doesn’t seem to have conducted any structured user needs study before specifying the requirements in the tender”, adds Jain. “Imagine the practicality of holding a white cane in one hand in a crowded noisy street, while using the other hand to hold the phone and point the camera accurately towards currency, without being able to see”.

A better approach he says would be to have a small wearable device.

The Central Bank of India and the Centre will need to step up and make sure that such missteps do not occur again in the future and that whenever currency is designed, it is done with thorough consideration. This is true not just for currency but digital transactions, banks and ATMs too.