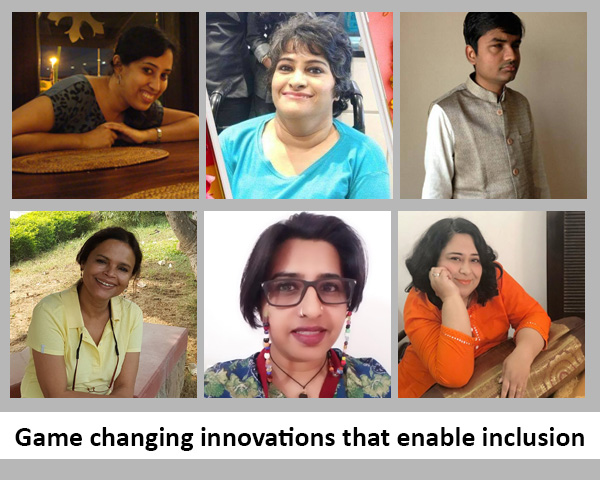 100 million of India’s population has some form of disability. For many of them, accessing modern technology comes with a host of difficulties.

Today, 16 May, Global Accessibility Awareness Day, aims to change that. Launched in 2015, this is a day that is meant to get people thinking about how we can all improve digital access and inclusion for people with disabilities.

So, what are some of the game changing innovations that have enabled digital inclusion for people with disabilities? They don’t necessarily have to do with a specific disability, or any disability for that matter. That’s the question we put to a spectrum of people and this is what they had to say.

Vidya Menon — A Deaf teacher at vshesh, an impact enterprise, she is passionate in encouraging deaf children to learn many new things especially in education.

I would say smartphone because of easy communication though video call, text messages and many things. If there’s any emergency, I could use video call to find out about any situations. And also have clear conversation with deaf people through video calls in quicker ways. This made life easier especially in having conversation with others. — Vidya Menon, Deaf Teacher, Vshesh

Amar Jain — A lawyer, Amar has an activist-like zeal in advocating for inclusion in all aspects, especially financial. Being visually impaired has not come in his way of being a passionate advocate.

“One of the things that has personally touched me and I have seen this being used by many people is the natural language processing capabilities that have enhanced over the years. I am especially talking about features like Dictation, Voice Input, stuff like that. I have seen that even drivers, maid servants – the so-called lower strata of society that is not so well-educated- is able to use it with things like Google Maps and that’s been a game changer. People who don’t know how to read and write can use the natural language processing capabilities, use their voice and say “I want to go to XYZ for example. It has empowered even those who are excluded from the technology ballgame. That, for me, has personally changed the way we look at technology.

Jasmina Khanna – This articulate senior systems engineer with cerebral palsy is committed to promoting accessibility in spaces both public and personal.

“The personal computer was of course a game changer in my life but there were two other things that really changed the way I used technology. They were the accessibility options available in built-in Windows operating system and the track ball mouse that really helped me to make full use of technology”.

Ruma Roka – Ruma, who is founder of Noida Deaf Society, is committed to empowering deaf children and youth in the space of education and employment.

“I think mobile phones and WhatsApp chats have opened up communication channels for deaf people in the country. Video chats, images, and videos are all accessible and used by the community from across the country. It has been able to disseminate information to deaf people no matter where they are, as long as he/she has an Android phone. And it is for free too…!!

Seema Lal – Co-founder of the well-known support group TogetherWeCan, Seema is committed to bringing transparency in children’s therapy and addressing the rights of people with disabilities.

“For Autism in particular, access to communicate one’s needs and express emotions has been greatly transformed thanks to technology. A few that stand out are:”

In general all social media tools which of course benefits all of us seem to have a larger benefit to not just persons with disabilities but also for their caregivers to find a platform to showcase their work, share their journeys, educate the public and more”.