In a first, people with disabilities attend the famous Thrissur Pooram 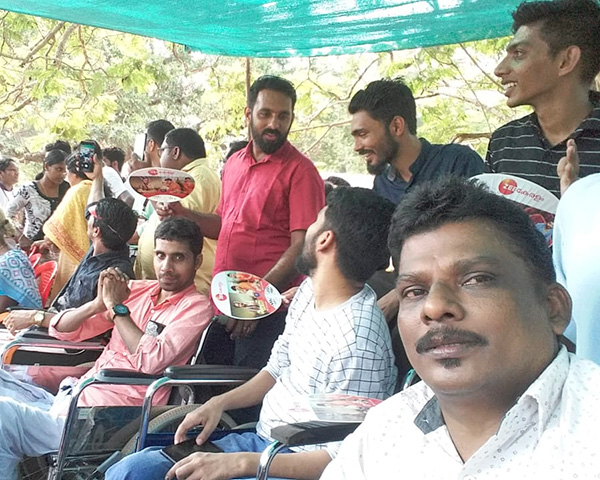 Thrissur Pooram, believed to be one of the world’s biggest temple festivals, concluded on 13 May. The festival that happens at Thrissur, a small town in Kerala, is thronged by thousands of people from across the world that come to witness Pooram every year during May. This year’s Pooram was special for nearly 100 people with disabilities who could take part in the Pooram for the first time. Thrissur District Collector Anupama TV, along with the help of local bodies and NGO’s took the initiative to ensure that people with disabilities witness the Pooram without any hassles.

The NGO Foundation for International Rehabilitation, Research and Empowerment (FIRRE), are the ones who took the initiative of organizing this. A makeshift elevated platform was created on top of a lorry along with a wheelchair ramp so that people with disabilities could watch it from the top at the Thekkinkadu Maidan. Since it was located close to the police control room, organisers could seek the help of cops when required. Each disabled person was also accompanied by a caregiver to the venue. There were thorough security checks as well.

Dr Sindhu Vijayakumar, Co-founder of FIRRE says that they are glad to have re-written history by providing disabled people an opportunity to witness the world famous Pooram. Sindhu says that it was difficult to get an approval from district officials. FIRRE had to ensure all the arrangements were done perfectly well.

Recently, FIRRE had organised a trip for around 40 wheelchair users to a beach. Many wheelchair users were witnessing a beach for the first time and they were excited. One of them expressed their interests to watch the Pooram, which they have never seen in their life. That is when we thought of organising exclusive facilities so that disabled people can watch Pooram. This is also an exercise to create awareness about disabilities. The district officials were very supportive-Dr Sindhu Vijayakumar, Co-founder, FIRRE

Dr Sindhu and her team submitted their whole plan to the District Collector on 25 April. Later, they met with temple authorities and other officials who gave them a go ahead. Apart from wheelchair ramps, people with disabilities and their caregivers were also provided with accessible toilets, air coolers and drinking water.

According to Dr Sindhu, the District Collector, Police Commissioner and temple authorities worked together to make this a grand success. They had ample support from the Ambulance Owners and Drivers Association as well. The makeshift stage in an elevated platform was built in such a way that it could carry a lot of weight.

“Taking part in the Pooram was like a dream come true for me. The makeshift stage was a good idea rather can create a real one because there were more than 100 people. I don’t think a stage could have handled all our weights. Wheelchair users from Kozhikode and Malappuram had also come to take part in the event. There were about 20 wheelchair users and many others with disabilities. It was a great experience and we are looking forward for this the next year as well, says Suresh KK, a wheelchair user from Thrissur.