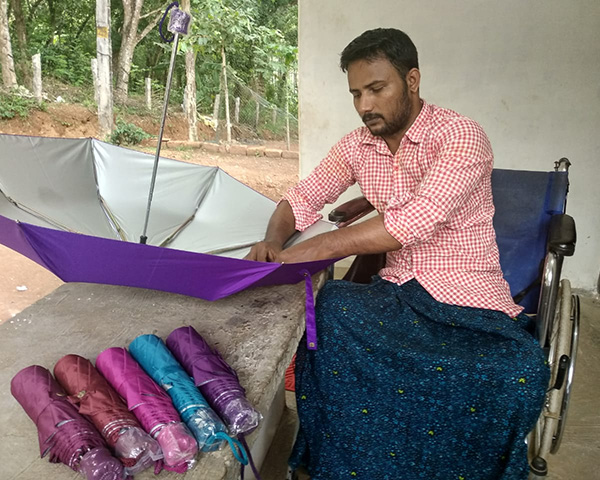 Summer woes are bidding goodbye. Monsoons are round the corner. The rainy season enters India by hitting Kerala first. God’s Own Country has recovered from the aftermath caused by the devastating monsoons last year. This time, the state is prepping up fully to face the monsoon. Umbrellas can be a blessing, during both summer and rainy seasons.

Umbrella By Differently Abled is entering their third year. Initially, the members started it as a WhatsApp group. Soon, they decided to spread the message far and wide, mainly through social media itself.

Team Umbrella By Differently Abled trains interested people on how to make umbrellas. They can order for an umbrella making kit by paying online and it will be delivered to them.

There are many wheelchair users and people with spinal cord injuries who never had the chance for education. Many are unable to read or write. Umbrella making was the right job for them. All they have to do is pay money online and get a kit delivered home. May, June and July are the right season for us because monsoons are full-fledged in Kerala during that time. There are many members who do it even after season gets over. We are more active on Facebook. But recently, we started becoming active on WhatsApp because many of our members are unaware of how to use Facebook. We provide them with ample training before they start making the umbrellas on their own- Team Umbrella By Differently Abled

The umbrellas are priced from Rs 250-300 depending on the design and size. The organisation gets bulk orders from schools, colleges and NGOs as well. They courier their umbrellas to all parts of India, and the buyers must pay additional courier charges.

42-year-old Shaharsha Koya from Varkala became a part of the group two years back. Koya, who is a wheelchair user, recently bought his kits and has started making umbrellas for the upcoming rainy season.

“I came to know about Umbrella By Differently Abled through a WhatsApp group. I have been a part of this venture from the start. I’am unable to do any other work because I’am a wheelchair user, and this is my only source of income. Last year, I sold 100-150 umbrellas. A volunteer from Umbrella By Differently Abled came home and gave me training on how to make umbrellas. I like doing this job as well. Since I live in a small town, my sales are also lesser when compared to many others who live in cities, says Koya.

“I have been making umbrellas for the past five years and am a part of Umbrella By Differently Abled ever since their start. Last year, I had good sales and I’am waiting for orders this year. I like doing this because I can earn on my own, says Suresh, a wheelchair user from Thiruvananthapuram.

If you would love to buy their products or get in touch with Umbrella By Differently Abled, contact them at 9037143656.

ALSO READ: LOGOS Transformation aims to change the outlook of corporates towards people with disabilities