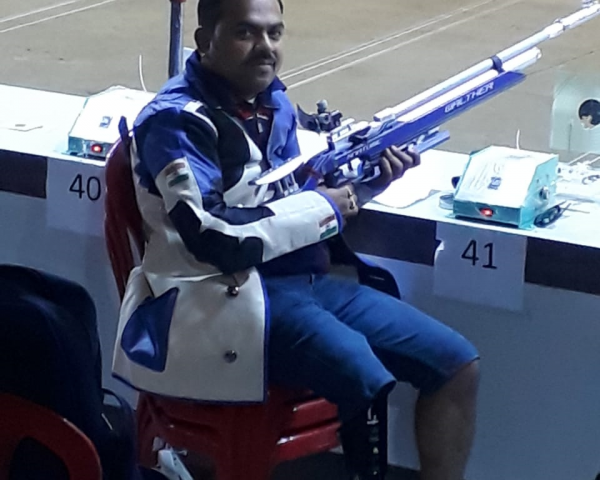 Even as a child, Amresh Kumar Singh had a keen interest in sports. A resident of Kanpur, Uttar Pradesh, he had a flair for different types of sports.

In 2017, Amresh’s leg had to be amputated after an accident, a serious setback for his sporting career, but he did let this hold him back. His passion to excel has made him into an icon for people around him.

Amresh is also a shooter and has won gold medals at various state shooting championships. Quite amazing given that he received no formal training in shooting and learned by watching videos. His mother is proud of how her son has managed to overcome many challenges to come this far. “I am proud of having a brave son like Amresh. Despite his struggles and hardships he has remained the pillar of strength to the family.

Amresh was awarded the Meerut Divyang Ratan Awardof India this year for his contribution to para sports. He has also held positions at various district and state level kho-kho associations and encourages others to lead an active life by taking up sports.

At times I feel discouraged when para sportspersons like me miss out on crucial tournaments due to lack of financial support from the government. I hope to represent India in para Olympics and win medals in international events. I am ready to put in the hard work needed to win but it is only useful if I get recognition and support from the government. – Amresh Singh, Para sportsperson

Amresh is carrying forward his legacy by training other disabled children in sports and motivating them to work hard and reach their true potential. He believes that the power to change our lives is within us and we need to keep trying without giving up. His wife, Manjula Singh says Amresh’s desire to motivate people around him is among his strongest qualities. “I am honored to be his life partner and have learned a lot from him. He is a very balanced and inspiring person and keeps every one motivated, she says.

Amresh is now interested in learning amputee football and is looking for sponsors who can help him reach his dream of representing the country at international arenas.