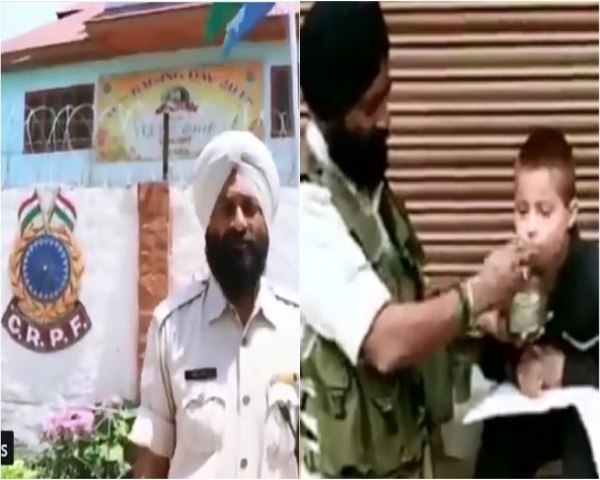 Security forces in Jammu and Kashmir live on the edge every single day but their humanity is intact. A video of a Sikh jawan that has gone viral on social media proves that.

Havaldar Iqbal Singh, a jawan with the Central Reserve Police Force (CRPF) was on duty in Nawadkal in Kashmir earlier this week when he saw a disabled child asking him for food. He walked towards the boy with his lunch box when he noticed that the child’s hands were paralysed. Singh started feeding the child dal and rice, wiped his face and fed him some water.

Unknown to Singh, a reporter of the news magazine India Today was shooting a video of him. The reporter, Abhishek Bhalla posted the video on Twitter with a message and it soon went viral.

Iqbal Singh was driving one of the vehicles in the CRPF convoy attacked on Feb 14 by a suicide bomber. He lost 40 colleagues but he hasn’t lost his sense of compassion. Feeding a disabled boy in Srinagar like his own kid. This is true love to mankind pic.twitter.com/opLj4WkqJR

“Feeding a disabled boy in Srinagar like his own kid. This is true love to mankind.. Compassion is another form of valour for those in uniform in an otherwise hostile environment. The likes of Iqbal Singh always demonstrate this.

Singh, incidentally, was one of the drivers in the CRPF convoy that was attacked by a Jaish-e-Mohammad suicide bomber on 14 February 2019. He lost 40 of his colleagues that day and many noted how that had not robbed him of his humanity and compassion.

Two companies of our battalion were stationed in downtown Nawadkal and while I was on duty, I took a lunch break. I saw a child gesturing towards me asking for lunch. I went towards him with my lunch box and I saw he was unable to eat by himself as his hands were paralysed. So, I fed him the food. I did not know someone was shooting a video of the incident. The CRPF is always there to serve the nation, 24 hours a day. Jai Hind! – Havaldar Iqbal Singh, CRPF

The Jammu and Kashmir Police posted the video clip on Twitter with the caption, “We care”.

The 31-second video was also retweeted by Mehbooba Mufti, former chief minister of Jammu and Kashmir with this caption — “Armed forces operating in Kashmir are often tarred with the same brush. But that generalisation can sometimes be grossly unfair. Salute this man’s sense of compassion & humanity.

The video has been shared by over 1,000 people so far and has won Havaldar Singh the commendation from the CRPF Director General. Many Kashmiris too have praised his gesture. Basharath Dar, an engineer in Kashmir, said, “This sent out a positive image of the security forces all over. This is the real human face of the forces and Kashmiris should take note of this as well.