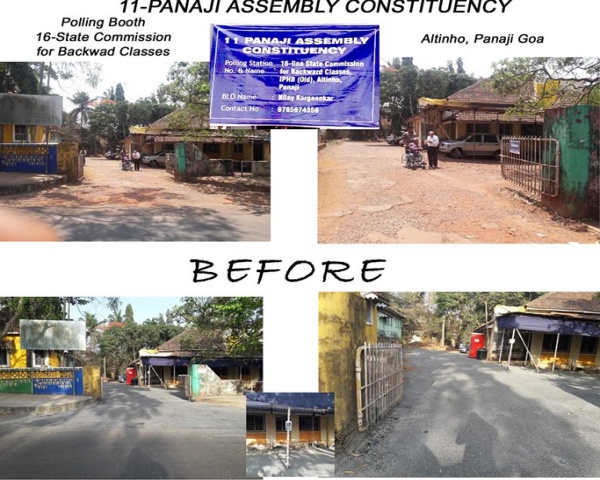 Less than a month after voting ended in Goa’s two parliamentary constituencies, the opportunity to set things right for persons with disabilities presented itself. Election officials and NGOs are working together to ensure that the mistakes of the Lok Sabha elections were not repeated in the bypoll.

Accessibility has been given a fair push in these general elections with the Election Commission of India (ECI) making efforts to ensure that people of different disability types are able to vote freely and fairly.

There were some hits and many misses but what is heartening is this news from Goa, where a joint inspection of polling booths was held by the Office of the Returning Officer, Panaji along with disability rights NGOs and engineers from the Public Works Department and the Goa State Industrial Development Corporation (GSIDC). This was perhaps the first time that such a step was taken and comes less than a month after voting ended in Goa.

The move was at the behest of the recently formed organisation, initiative for Disability awareness rights and empowerment(iDare, after getting mixed reactions from voters with disabilities from different parts of Goa.

We were very disappointed at the state of affairs. But what was good was that some polling booths were excellent in design terms and also people manning it. iDare felt there was hope also because polling booths in Goa seemed to have fared much better than other states across the country. So, we shot off a letter to the Chief Electoral Officer Goa with suggestions of what could be done to make history in the Panaji bypolls. – Monika Kshatriya, Secretary, iDare

The CEO was quick to respond and a plan was made with Taha Haziq, the Nodal Officer, who is visually challenged. A plan was made to conduct a joint audit by government agencies and three NGOs – iDare, Disability Rights Association, Goa (DRAG) and National Association of the Blind (NAB). “Five auditors and volunteers from the NGO Childline India conducted the audit on 11 May with logistical support from the Returning Officer, adds Kshatriya.

Among those to share feedback and participate in the subsequent trainings was Sandhya Khalokhe of the Goa Special Schools Association, who is also parent to a child with an intellectual and physical disability.

“I found there was no sensitivity or awareness among the booth level officers (BLOs) as well as police manning the voting booths, said Sandhya. She says she was not allowed to take her vehicle close to the booth even after she explained that her son, who is eligible to vote, has difficulty walking. “There was no wheelchair available outside either. It was inside the booth and there was no volunteer or official to tell us where the wheelchair was kept. Arrangements were made but there was no sensitisation.

Similarly, while there were provisions for escorts for people with intellectual disabilities, this was not communicated to the booth level officers.

Raj Vaidya of Lokvishwas Pratishthan, which was among the organisations participating in this initiative, says there is need for advance training of polling and security officials. Vaidya suggests three main areas of focus going ahead.

“Being well prepared in advance, have a checklist and things-to-do in place and plan systematically. Sensitise all concerned officials/authorities connected with polling, take NGOs into confidence, and work with them, and make buildings that are polling booths permanently accessible as per National Buildings Code provisions.

The good news is that based on this exercise poll officials have organised sensitisation training towards voters with disabilities for all BLOs. There was another training by special educators to help voters who are either mentally or intellectually disabled along with their guardians on the process of voting.

Based on the audit, the Returning Officer has also made a list of the changes required at each booth. This has been handed over the agency in charge. This collaboration by NGOs and CEO Goa should set an example across India.