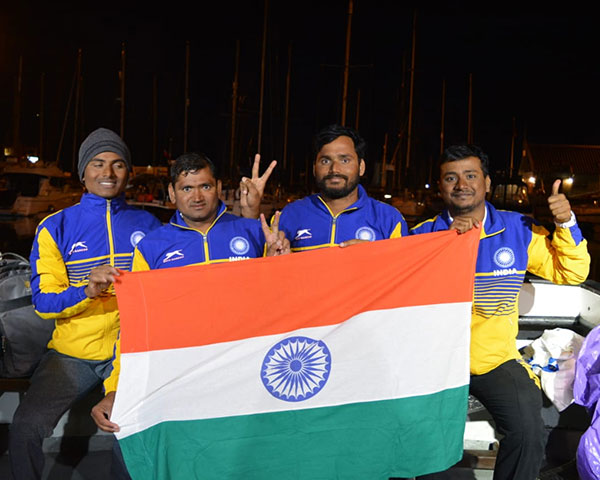 Considered among the world’s most dangerous stretches, swimming the Catalina Channel is not for the faint-hearted. This August, six para swimmers from India, will be attempting to achieve that milestone.

Imagine swimming your way through 20 miles of icy water filled with kelp beds, sharks and jellyfish. Not to mention the treacherous currents and chilly winds. Well, six para swimmers from India are going to attempt just that in August this year.

“We plan to start on 18 August and expect to complete the swim in 10-12 hours, says para swimmer Satendra Singh, who successfully swam the English Channel last year.

Satendra will be swimming the Catalina Channel with the same team of swimmers, along with two new members. Their goal is to complete the Ocean Seven, a swimming marathon consisting of seven channel swims. It is considered to be on par with the Seven Summits mountaineering challenge.

The Ocean Seven challenges a swimmer to complete swimming across the world’s most difficult seas. One of them is the English Channel between England and France, Catalina Channel (Catalina Island to the California mainland), Strait of Gibraltar (Spain to Morocco), North Channel (Ireland to Scotland), Kaiwi Channel (between Molokai and Oahu), Cook Strait (North and South Island of New Zealand) and Tsugaru Strait (Honshu and Hokkaido) in Japan.

Rohan More, who is the coach of the para swimmers team has the distinction of being the youngest Indian to complete the Ocean Seven challenge. He rates the Catalina Channel swim as a tough one.

After the English Channel, the Catalina is the toughest. All those attempting this feat have to swim at night as the waters are shark infested. This makes swimming at night time safer as there is no light. This will mean the swimmers have to depend for guidance on glow sticks which will be there on the three boats accompanying them. – Rohan More, Coach, Para swimming team

More, who had coached the team for the English Channel, says he is focusing on improving their speed. “The tides at Catalina Channel are very strong so you have to swim fast to complete the target. The quicker they swim, the faster they will finish.

Satendra expects the icy waters to be a challenge as well and is building his stamina ahead of the big day. “Having completed the English Channel, we are not so bothered about the cold, says fellow swimmer Jagdish Chandra Teli. “We are practicing in cold water too, so we are prepared.

For para swimmer Chetan Giridhar Raut, the distance is a concern as this is a longer stretch than the Channel. “The water is colder and choppier too. Under such conditions, diet is of paramount concern and the swimmers are paying careful attention to that. No outside food and lots of protein in the form of sprouts and chicken. They are also storing up on their fat reserves. “The fat percentage needs to be higher because we have to be in the water for longer, so we need to make sure we don’t run out of fat reserves, says Chetan.

The presence of sharks is some cause for tension, but as Jagdish puts it, what is life without a little risk?

ALSO READ:The only disability is a bad attitude – My Take by Satendra Singh, 1st Asian para swimmer to cross the English Channel