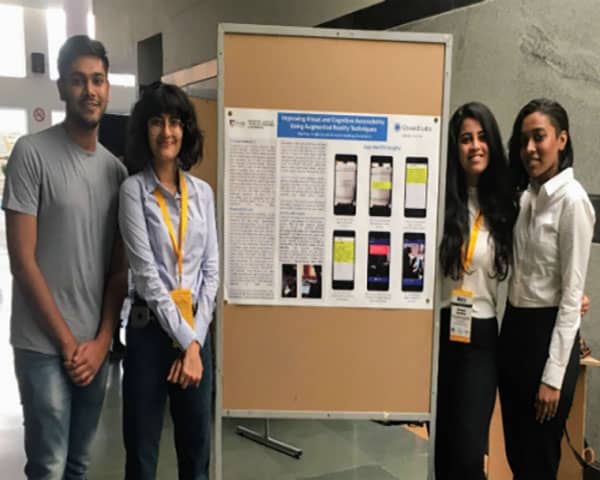 Dyslexia makes reading, the core aspect of school education, difficult for children. On #TechThursdays we feature Augmenta11y, an app developed by students, that aims to help children with dyslexia learn better.

Over 35 million children enrolled in schools across India have dyslexia. That’s a big number but there are not enough tools available to help them go about their daily lives better.

The team was determined to work towards creating an impactful product, that would help make daily life easier on a meaningful scale. One of our main focus areas lay on accessibility, user interaction and user experience. Accessibility, not only in terms of user interaction with the application, but also dealing with how an individual could better interact with the world around them. – Tushar Gupta, Co-developer, Augmenta11y

Augmenta11y, which is available for free on Android and iOS users, works in real time unlike tools that are currently available, claims Gupta.

“We developed algorithms to ensure that superimposed text is placed in the right location, is of the correct size and is stabilised, adds Gupta. “The rendered text can be tapped on, which takes the user into the reader mode, where they can access the read aloud mode via which Augmenta11y reads the data out.

There are options to change the font style of the text, including a special font, called Open Dyslexic designed by researchers specifically for people with dyslexia. The font helps the user focus on the words.

This feature helps address some of the challenges faced by children with dyslexia, between the ages of seven to 14. These include confusion between alphabets like ‘b’-‘d’, ‘a’-‘o’, ‘u’-‘v’, jumping between lines, and losing track of the sentence being read.

Augmenta11y also allows the user to adjust line height and letter spacing of the text, making it easier to distinguish characters from each other. The read aloud mode dictates the text data out loud to the user for better comprehension.

Users can also change the contrast ratio of the font and its background. Research has shown that a yellow-black combination is preferable over a standard black-white contrast.

What started off as a thesis project, with the support from Oswald Labs and is currently making an impact on the lives of children in schools. Augmenta11y is a part of Shravan apps, a set of smartphone apps, marketed by Oswald Labs for people with disabilities.

“We are very excited to open the Shravan platform and our technology to Tushar’s team, who truly want to make an impact on how children with dyslexia study today, says Anand Choudhary, CEO, Oswald Labs.

Supriya Agrawal, Professor, NMIMS MPSTME, the project mentor is happy and proud with the response to the app.

“I had taught a student with dyslexia before, and as a teacher sometimes it became difficult to give the student extra time and attention while maintaining the balance with the rest of the class. Hence, I was familiar with their struggles and with this motivation, I allowed the team to implement their idea. I am proud of my students for designing an app which can make a real difference in people’s daily lives.


Handicare enables people with lower limb disability to move around in a safe, hygienic manner