Pune centre builds awareness, stands up to the stigma around schizophrenia 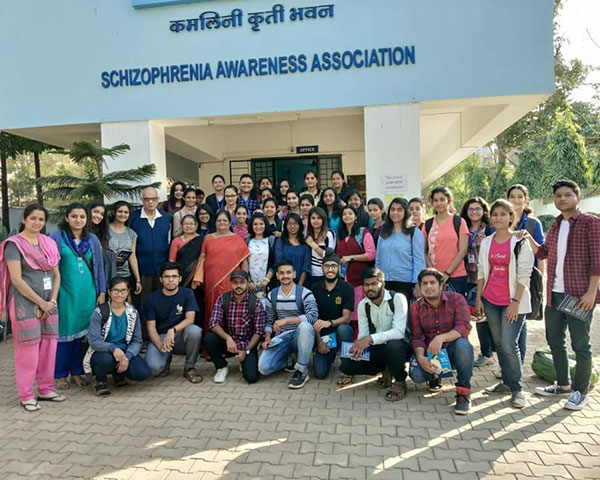 A complex mental disorder, the misconceptions around schizophrenia are many. Today, on World Schizophrenia Day, we look at a program in Pune that is attempting to change this picture.

Nikhil Pethkar was a first year student of engineering when he started suffering from hallucinations. He would see human figures and was unable to sleep. It would take over 10 years before he was finally diagnosed with schizophrenia.

Nikhil’s experience is one that is commonly echoed by patients with schizophrenia, one of the most misunderstood mental disorders. This comes in the way of patients and caregivers seeking help.

In Nikhil’s case, relief finally came from the Schizophrenia Awareness Association (SAA), a Pune-based rehabilitation centre, where he experienced the healing effects of art-based therapy. The programme is funded by the Mariwala Health Initiative that is focused on making mental health accessible to marginalised people.

Every year, on 24 May, World Schizophrenia Day, the SAA holds a public meeting to create awareness about the importance of early detection and treatment.

Families are caught unaware when the illness strikes. The first signs are laziness, irritation, aggression, withdrawal, eating too much or too little, suspicion, etc. Families blame bad company or themselves for not taking good care of their wards or believe someone has done black magic. The illness then becomes chronic and difficult to treat. – Amrit Bakhshy, President, Schizophrenia Awareness Association

The next major challenge is that patients often refuse to accept they have an illness that needs treatment, adds Bakhshy. “The patient will refuse to go to a psychiatrist or take medicines. Families are compelled to resort to offer the medication covertly and if the patient comes to know, he/she refuses to eat meals cooked at home. Patients with positive symptoms can become aggressive and attack family members. Those with negative signs can do self-harm.

Vaishali Patwe struggled for nearly six years to cope with her son Digvijay’s symptoms. “He would alternate between extreme violence and calm. He would beat me and my husband up and then minutes later apologise profusely. I have an elderly mother-in-law and younger child at home, and I was always scared he would attack them.

Vaishali finally rented a room in another area where she looked after her son. The reaction from neighbours didn’t help matters. “They were scared he would be violent towards them and I could understand that, but it was a very lonely and stressful time for me.

Today, Digvijay is getting treatment from a mental health centre and is recovering. It is families like these that the SAA is reaching out to.

Founded in 1997, the SAA is run by survivors, caregivers and volunteers jointly. The approach is to work with users and caregivers to build their capacities and talents. It also runs a Day Rehabilitation Center for people with mental illness in Pune where they are rehabilitated with various types of therapies – music, painting, clay work, dance, singing, to name a few.

An intervention that is critically needed when you look at the figures. According to the World Health Organization (WHO), schizophrenia affects around 21 million people worldwide. The National Mental Health Survey of India (2016) reports that nearly 1.9% of the population are affected by severe mental disorders, including schizophrenia.