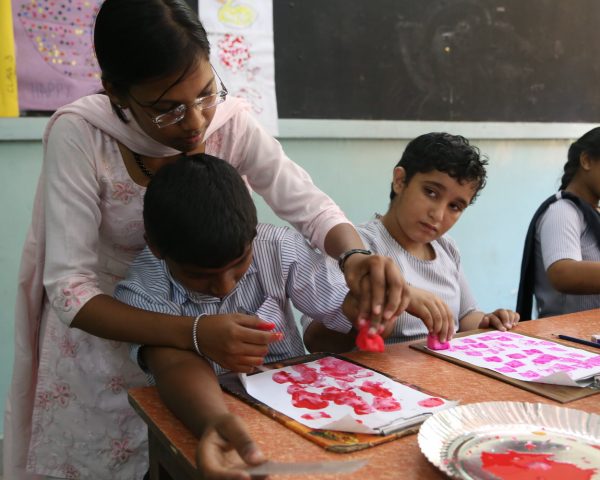 Children with developmental disabilities from economically marginalised families are the most neglected by the education system. Mumbai-based NGO Urmi Foundation is trying to change this.

Until a year ago, Aaradhya could not walk and would barely be able to read. Today this nine-year-old walks with the support of a wall and looks forward to going to school.

“She was studying at a special school inside a hospital earlier and experts there said she should attend a mainstream school, says Aaradhya’s mother Nisha Deepak Birje. “Since she started attending the new school, there has been a behavior change. She is less hyper and has started walking by herself, with support.

The change in Aaradhya has been enabled thanks to the intervention of NGO Urmi Foundation which reaches out to children with developmental disabilities from low income households. The team focuses on the educational and social needs of children with conditions like autism, cerebral palsy, Down’s syndrome, to name a few.

Founder Sonalee Shyamsundar was motivated to start the initiative after she saw a child out of school tied up with a rope, “locked and ignored.

“The parents said he was very hyperactive and unable to understand any verbal instruction given and I started thinking about what must be wrong with the child, says Sonalee. Multiple hospital visits later, the child was diagnosed with ADHD (Attention Deficit Hyperactive Disorder). “I learned that ADHD is a disability and there are other developmental disabilities that are permanent, not curable and affect a child’s learning and social inclusion.

That was the start of Urmi Foundation’s journey. After initial research in the communities, the team looked at special schools run by the Brihanmumbai Municipal Corporation (BMC), the only municipal corporation in India running special schools. What they found was that the assessment system barely focused on the needs and environment of special children from the low income communities. Urmi then designed a model and programmes and an impact assessment system focusing on the needs of the special children from these communities.

Today the foundation has adopted 10 BMC schools and launched 11 community schools across Mumbai. Urmi has an outreach programme which reaches out to communities near BMC special schools. The team convinces families who have children with developmental disabilities to send the kids to school. Children above seven are enrolled in BMC schools and those younger at Urmi’s community schools for early intervention.

The beneficiaries we work with have multiple misunderstandings and extremely poor knowledge about disability. This affects the child’s health in a big way. Families of most of the children we enrol are not aware and the child is kept at home without treatment and education. Many felt it’s a curse to have such child. – Sonalee Shyamsundar, Founder, Urmi Foundation

So far, the foundation has adopted 10 BMC schools and launched 11 community schools across Mumbai. Urmi has an outreach programme which reaches out to communities near BMC special schools. The team convinces families who have children with developmental disabilities to send the kids to school. Children above seven are enrolled in BMC schools and those younger at Urmi’s community schools for early intervention.

Rajshri Ashok Chitole children, Gaurav and Gayatri, attend a community school run by Urmi. “My son is 13 years old and my daughter is 15. Both are slow learners and were unable to read properly earlier. Since they started attending the community school, Rajshri has seen an improvement.

“My daughter was very restless earlier and would never listen to me. Now she is less disobedient and they both pay attention to their studies. They come home and tell me what they have learned that day and are interested in going to school.

“We have designed our intervention with an impact assessment tool tracking every small change in the child, says Sonalee.. The therapy-based intervention has been developed in a manner such that a child can access community-based facilities even if they are not inclusive. “Our pre-vocational project has helped create three self-help groups and provided employment to 70 beneficiaries, says Sonalee. “Until now, a total of 238 children from Urmi are employed or engaged in vocational activities.