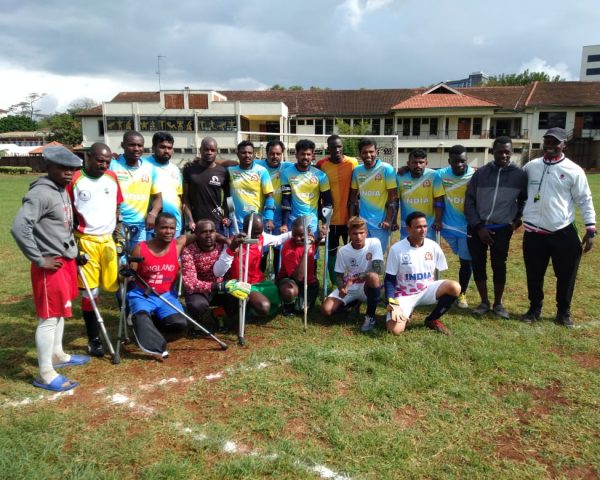 The Indian amputee football team made their international debut against Kenya earlier this month. However, they are struggling for lack of funds and government support.

We celebrate their medal-winning performances but do little to back them with training and other support. That’s the story with most para sports in India, most recently evident in the case of India’s amputee football team.

The team recently played their first international match against Kenya. India lost the tournament but the experience has made them even more determined to reach new heights.

With a strength of over 15 players and five officials, including coaches, the team is working hard to spread its wings, but lack of government support and financial aid could come in the way of getting far.

Take the Kenya tournament for instance. Only 10 players could attend the event as the rest did not find sponsors. The team has players from across India, including Karnataka, Kerala, Delhi and Rajasthan.

The Indian amputee football team is the brainchild of Vysakh SR, an amputee from Kerala. Vysakh lost his left leg in a bike accident when he was on his way to attend a football selection camp. Over the last many years, Vysakh has been training himself to excel at the sport. He regularly plays with friends in his hometown, Kozhikode.

Our main aim is to represent India at the Amputee Football World Cup that is scheduled to happen in 2022. We want to play as many international matches in the next three years so that we can confidently represent India in the tournament. The biggest problem that we face is lack of sponsors. Currently, our players have to fund themselves or find someone who can sponsor them. The government is not supporting us in any ways. It is disheartening-Vysakh SR, Captain, Indian Amputee Football Team

The team is affiliated to the World Amputee Football Federation (WAFF). But back home, it has a long way to go. With the right support, coaching and guidance, amputee football team can scale heights in India.

“We need the government to fund us, says Vysakh. “Without support, we cannot take our game further. The last tournament that we played with Kenya has boosted our confidence. The Kenyan team is ranked number 12 in the world and we could play with world champions. We learnt a lot from the tournament. These lessons are going to help us in the future too.

Sajesh Krishnan, well-known as Kerala’s first blade runner, is also a part of the amputee football team. Krishnan says representing India at an international tournament is a dream come true.

“It was a great experience. I am a marathon runner and representing India was something that I always wanted to do. We are working on improving our game and making it perfect. But without government support, we will not be able to do it.

Hopefully, these words will reach the people who matter and the football team will get the support it needs.