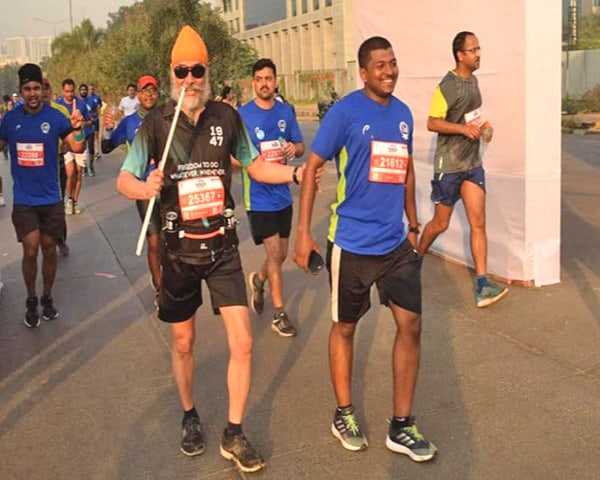 Amarjeet Singh Chawla, the visually impaired marathoner famously known as Sporty Sikh, successfully completed his first long distance run from Mumbai to Pune on Sunday. Chawla’s run was to spread awareness about avoidable blindness and how to prevent it.

On Sunday Amarjeet Singh Chawla showed the world why he well deserves the moniker of the Sporty Sikh. With well over an hour to spare, the 63-year-old visually impaired marathoner reached the finishing line at Rabindranath Tagore School in Pune.

Chawla started running from the Goregaon Sports Complex on 31 May at 5.30 AM. A seasoned marathoner, he has run 174 races. The 160-km stretch from Mumbai to Pune was his first long distance run.

The distance was not the concern for me, more the heat. There were parts that were physically very arduous, especially while climbing the ghats. There is no tree cover on large parts of the cover which makes the impact of the sun’s rays even more severe. Given all that, I am very satisfied with the run especially since we made it well before time. – Amarjeet Singh Chawla, Visually impaired marathoner

What made the run an especially memorable trip was the number of people who joined in for moral support. Chawla set off from Mumbai with 72 people, most of whom dropped off in the middle but there were plenty who joined in for distances of 5-10 kms. “Until Panvel we had good company with many participants from the Pinkathon who joined in, says Chawla. “There were people who even joined us when we started early at 5.30 PM which was good.

The run is part of an annual event called No More Avoidable Blindness, an initiative of the National institute of Ophthalmology (NIO) Vision Marathon. Every year, runs are organised in Mumbai to spread awareness about the cause.

“This is the fourth year of our campaign, said Nikhil Shah from the Run Buddies Club, which organises the marathons. “I am happy, amazed and thrilled at the success of this year’s event. Despite the hot sun this man was running at super speed and others were struggling to keep up with him. So many people stopped us to ask about the case and what they should do to prevent avoidable blindness.

Chawla’s daughter Guneet Kaur Chawla, who accompanied her father throughout, was happy and relieved that the run ended smoothly. “I was concerned and quite worried because of the heat and the long distance. He has run many marathons before but there things are arranged This was a free run. I am glad he completed it successfully and so many people turned up in support.

At 63, Chawla shows no signs of calling it a day on the running track. Amazing given that he took to running rather late as a means to fighting the depression that overtook him after he lost his vision completely. What’s the secret to his phenomenal fitness and energy levels? “Pranayama, yoga and spot jogging, says Guneet. “He does not eat much but whatever he does eat is healthy like milk and nuts.