#ChangeMakers – A teacher by accident, Shiny Vinson weaves a rare magic with kids 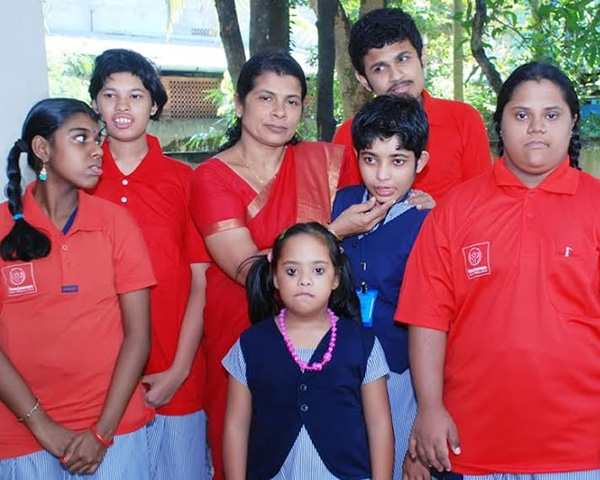 Through June, in our campaign #ChangeMakers, we will being you stories of school principals who are pushing for inclusion in their classrooms, thereby bringing about a change at a crucial juncture. We start with Shiny Vinson from Kochi.

Teaching was the last career option Shiny Vinson had in mind. She stumbled into it quite by chance and has not looked back. In her career span of 30 years, Shiny has taught hundreds of children with disabilities.

Today, as principal of Navajeevan School for Special Needs in Kochi, she continues to make a difference, inspiring colleagues and friends.

So, how did the focus on children with disabilities come about? Quite by chance. After her marriage, Shiny started taking tuition classes for kids near her home. Soon after she had her first baby, a child with ADHD came for her classes. He had been rejected by other schools.

I did not want to take him in because I had no idea how to handle children with special needs. But his parents were adamant that I teach him and they were in tears and helpless. So, I took him on and gradually we saw a change for the better in him. My daughter and he got along well too. My life started to revolve around him and helping him improve. – Shiny Vinson, Principal, Navajeevan School for Special Needs

Soon, the child was enrolled in a mainstream school and the impact Shiny’s teaching had made was noticed. “Some parents told me I must start working for children with special needs, says Shiny. She was unsure but gradually opened up to the idea. “My daughter had joined school by then and I had a lot of free time and I was interested in reaching out to children as it gave me immense pleasure.

Shiny joined a course in Special Education at the Raksha School in Kochi where she met many professional special educators who mentored her. She started working in a school for kids with disabilities in Kochi, among a handful at the time.

“I met many parents and children from whom I learnt many new things. At one of the schools, I met Nisha who like me was a special educator. We thought of starting something on our own in order in Kochi to empower more children with disabilities. There was a huge lack of awareness about disabilities amongst the society and parents too and we wanted to help bridge those barriers, she says.

But the early years were hard. They started a school exclusively for children with disabilities but financial constraints forced them to shut it down. However, within a few years they were able to start Navajeevan School with the help of a few kind-hearted souls who stepped. “I couldn’t have been happier in life. Now, everything is going well for the school and our children, says Shiny.

there were numerous instances when she was able to touch the hearts of both children and parents. KL Mohana Varma, Chairman, Navajeevan Trust, which supports the school, calls Shiny an inspiration to youngsters who wants to pursue a career in this field.

“The requirements of each student are different. Shiny has the capability to realise those and she works on it for the better. There were many incidents that have shown her brilliance as a special educator. Her commitment, dedication and leadership qualities is par excellence, says Varma.

Parents of students studying here marvel at the gift she has in interacting with their children. Smitha Babu, whose daughter Varnna studies here says her child loves to go to school and that .

“My daughter loves to go to school because of her. Shiny teacher takes the effort to understand each child. She even checks on their background and tries to know more about them so that she can interact with the child accordingly. Not many people take the effort for all this. She is indeed an inspiration, says Smitha.