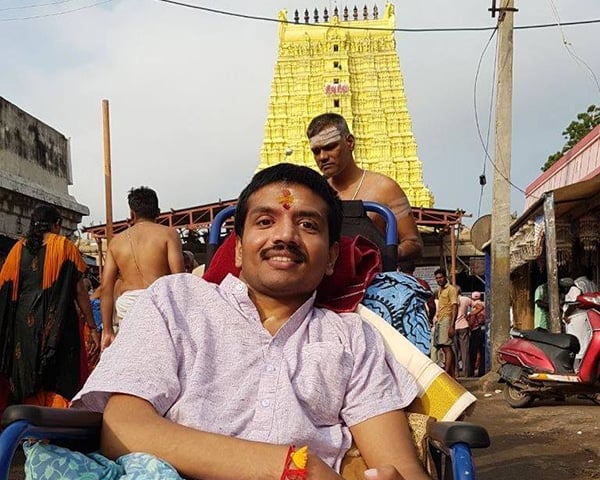 Ajay Balachandran, a techie and writer from Kerala, has published a book Sreerama Geetha which is also going to be out in audio form. He talks to NewzHook about how he juggles so many interests with ease.

Ajay Balachandran is a man who dons many hats. Just 29 years old, Ajay is a poet, systems developer, data consultant and an administrative assistant. A quadriplegic, Ajay seems determined to defy any barrier and backing him in this endeavour is a his family.

Like most youngsters, Ajay had many dreams and ambitions for the future until life changed when he was 18. Ajay was studying for engineering at the time in Bengaluru. While going back home, he fell from the train. He lay unconscious on the tracks for a long time until someone passing by took note and informed authorities.

Life changed in an instant for Ajay. The next few months were spent at hospitals and therapy centres.

I did not know what being a quadriplegic is going to be like. Doctors told me that I will have to undergo regular physiotherapy sessions and nothing else was there to be done. I visited many hospitals in a short span of time looking out for better treatment but all the doctors said the same thing. Gradually, I synced into the fact. – Ajay Balachandran

The first few months were hard. “I used to cry everyday thinking about the fate that fell on me unexpectedly. But now, 10 years later, my body has definitely improved. I can move my hands and am able to do things independently.

Ajay’s family, consisting of his mother, sister, and grandmother stood by him through thick and thin. His father, who passed away recently, ensured Ajay never gave up. He also met many people with disabilities. One of them, Madhu, inspired Ajay to look at life with a new vision. Ajay ventured into the world of literature. In poetry, he found a poweful means of expressing himself.

He recently published a book, Sreerama Geetha, which has verses from the Ramayana. “I used to read the Ramayana after my accident and there were parts that inspired me. I brought all those parts together to publish a book, which I hope to release in audio form soon.

Ajay still struggles with his hand movements and wants to work on a device that will help him improve that. There is a device called Continuous Passive Motion (CPM) that helps with a similar problem in the legs. Ajay hopes to introduce this for hands so it can help people.

Ajay finds time to engage in community activities too. He recently participated in a programme organised by the National Institute of Speech and Hearing. He also wants to promote Boccia, a game for people with disabilities, in Kerala and is working with the Ekta Foundation to do that.

“I realised that there is no point in staying sad or depressed in life. The happier you are, the better, says Ajay. “Laugh as much as you can because it does wonders. If you don’t find a reason to laugh, still try and laugh.

His mother, Jayshree Balachandran is happy to see the old spark returning to her son’s eyes. “Ajay was such an energetic youngster brimming with happiness. So when the accident happened, we were all shocked and sad. But now, over course of time, he has improved and is becoming independent. Seeing this gives me immense happiness.