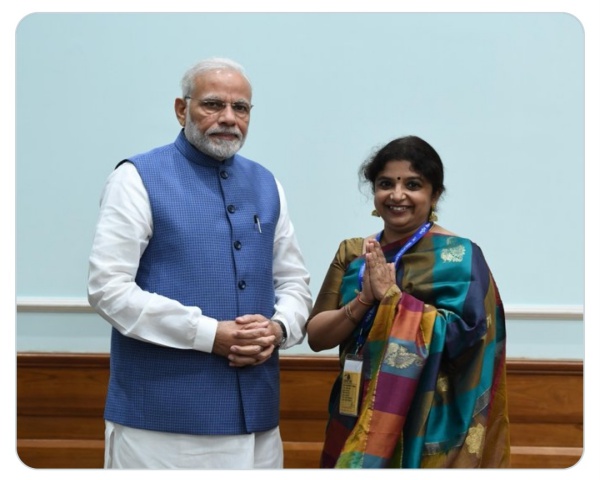 In our June campaign #ChangeMakers we highlight people who are making a push for inclusion at a stage in life when it matters the most — in school. Today, we bring you the story of Manju Arif, Principal of Delhi Public School, Bangalore North.

“I believe everyone cherishes a desire to be inclusive. That open hearted and warm statement sums up all there is to say about Manju Arif, who typifies the ‘can do spirit’.

A spirit that draws everyone to her, be it parents, teachers, special educators, entrepreneurs, and above all children, who have found in her their fiercest champion. Regardless of the type of disability, Manju will do what is humanly possible to ensure that every child who knocks on her door gets the opportunity to live up to his/her potential.

This passion and conviction made teaching the obvious career choice as a young graduate. A subsequent move to the United Kingdom where her husband, then an Indian Air Force office was transferred, opened her eyes to what education in its truest sense meant

“I saw inclusion being practiced for the first time in my life, recalls Manju. “I saw how the system included everyone. When the couple returned to India two years later, Manju took the idea to the management at Delhi Public School Bangalore North and found them receptive.

So, what if no one had a clue what the first steps were? Manju looked into the CBSE guidelines and found accommodations for children with disabilities existed. She also looked outwards for support and found it in Rukmini Krishnaswamy, Director, Spastics Society of Karnataka who became a mentor.

“I found her enthusiastic and forever wanting to learn to improve the education system and understanding of the socio-emotional needs of children of all ages”, says Mrs Krishnaswamy”.

The admiration and respect is mutual.

I saw her unconditional love while working with kids with cerebral palsy and the technologies they were using. I went to the University of Iowa and saw the work being done by groups there. When I took over as principal, I started working with the children here. I learned from every child here and the most important learning was that we didn’t have to be perfect with our support systems. I worked closely with the parents as well and the minute we said we are ready to help the kids, the community came forward and said we will help you and they supported us in a phenomenal way. – Manju Arif, Principal, Delhi Public School, Bangalore North

Among the many institutes to come forward was the National Institute of Mental Health and Neuro Sciences (NIMHANS), Bubbles Centre for Autism and the Chandrashekhar Institute of Speech and Hearing Impaired. It also helped that the school management was open to making changes in infrastructure, counselors and trainers, says Manju.

In 2010, the DPS North started the open schooling system and permission was sought to run a section for students in NIOS during regular school hours through the week so there was a social connect established between all the kids. School excursions are organised jointly as well to cement that sense of togetherness. There is also a school for children from below poverty line (BPL) families to enable diversity across the whole spectrum.

This sense of inclusion extends to the faculty as well. ‘We have a music teacher who is visually impaired and has multiple disabilities, says Manju. ‘He needs to be accompanied by his mother to school and the management is fine with that.

It is this undying commitment that makes Manju such an exceptional leader, says Sarbani Mullick, Founder-Director, Bubbles Autism Centre. “I have known her for a long time and she truly believes in inclusion will try and find every opportunity to give a platform that children can be a part of. There may be schools that have better facilities but she is committed to giving everyone a chance to grow.

No wonder Manju’s efforts have won her and the school many acknowledgements. DPS North has been ranked often among the top schools in India and Manju won the National Award for teachers in 2017 given by the Ministry of Human Resource Development, Government of India.

Her efforts have helped build a larger sensitivity among teachers and non-disabled children as well says Honey Chandra, who teaches Maths. “We never deny admission to anyone and whatever accommodation is needed in the form of ramps for physically disabled students or subject help, we give. We guide them in whatever way we can.

Manju’s approach towards inclusion has won her many admirers. Paul D’Souza, an inventor who met her during a crowdfunding campaign by DPS students, calls her “warm and transparent, someone with no ego.

“She draws the students towards her, not stay aloof, says D’Souza. “She has gone the extra mile for children with disabilities and in doing that sends a message to other schools. Every child there gets dedicated care and attention.

Put this to Manju and she calls the real champions of inclusion.

“This year we had a child with cancer sitting for the board exams who could not attend school even a single day, but all his classmates helped with notes and whatever else he needed. I have children with autism who have meltdowns in class but there is such empathy that the others in the class say, ‘well he is different’. I could never have done this if it hadn’t been for the support shown by the kids, disabled and non-disabled.