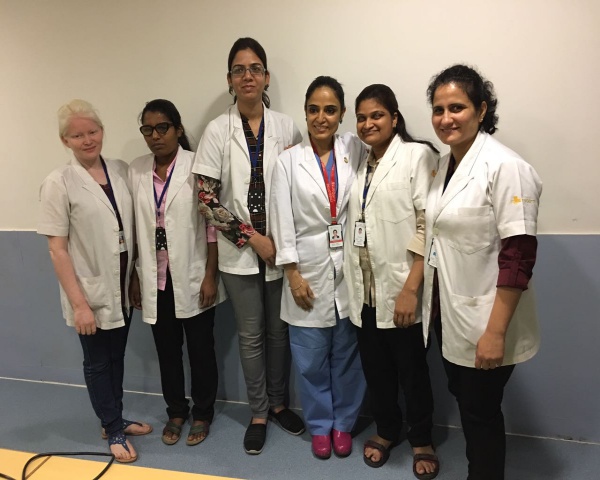 In Story of the Week, we look at the Discovering Hands programme in India under which visually impaired women are being trained to detect breast cancer lumps by touch. This year the programme is being expanded to Bengaluru and Kashmir.

Hasiba, 25 years old, had signed up for a computer training course at the National Association for the Blind Center of Blind Women and Disabilities in 2016 when she heard about the Discovering Hands programme that was soon to be launched.

Under the programme, visually impaired women over 20 years of age are trained as medical tactile examiners (MTEs), a role that requires them to detect lumps or nodules in the patient’s breasts using their sense of touch.

Hasiba, a late blind who once nurtured dreams of becoming a nurse, was instantly drawn to the idea. “At first, I felt very shy and quite uncomfortable about touching the bare bodies of other women. So, to begin with the training involved us touching women through their clothes.

Gradually Hasiba got used to the idea and finished the nine-month training programme successfully. Of this, three months were spent interning at the Medanta Hospital. She is now working at the C K Birla Hospital in New Delhi, where there’s a large research underway into this project.

Hasiba says becoming an MTE has changed her life. “I am earning well and have a safe and secure future. I would strongly recommend this to other visually impaired women.

The Discovering Hands programme is the brainchild of German gynaecologist Dr Frank Hoffman. In 2006, concerned about the rising number of young women reporting breast cancer, he wondered whether blind women could do a better job of detecting small lumps. This is critical to catch the disease at an early stage. He found that while doctors found these tumours when they are between one to two centimetres in diameter, blind people could detect them even earlier.

Dr Hoffman started an organisation called Discovering Hands, and developed a programme to train blind women to become MTEs. Today there are MTEs in Germany, Austria, Colombia, and Mexico. In 2017 the first batch of MTEs were trained in India after pharma major Bayer India approached the NAB seeking help to identify suitable women for the job.

“We first conduct a phone interview with those who are interested, says Sonal Prakash, Trainer-Coordinator. “Those shortlisted are then called to the centre for an assessment. The assessment is done over five days after which the list of trainees is finalised. They have to undergo nine months of training, three of which are spent as interns in various hospitals.

“We take girls who are above 20 years and have studied up to Class 10 or done science up to class 8″. Knowledge of English is an advantage as the course material is in English. “But we are not rigid about that, adds Sonal.

The MTEs are also trained to ask the right questions during the examination, like family history, contraceptives used, alcohol/cigarettes intake, so she can assess the person for risk. If needed, the person is then referred to a clinician for further tests. They also teach the women how to conduct self-exams and emphasise the importance of mammographies after a certain age.

The first batch of seven students were all from Delhi and neighbouring towns. The second batch, currently under training, saw applications from across India. Currently, the programme is undergoing research at the C K Birla Hospital for validation, which is mandated by law. Once the validation process of completed in four-six months, there are plans to expand it to more hospitals in Delhi and other cities, says Dr Mandeep Singh Malhotra, Head, Surgical Oncology, Rajan Dhall Fortis Hospital, who has taken the initiative to execute this program in hospitals.

“This is a very important initiative because in India breast cancer screening is not happening”, says Dr Malhotra. “There are many cases being detected among women who are 40-45 years old which means the screening has to happen at least 10 years before that for treatment to be given”. Unlike in the UK and the US, breast cancer screening in India is still matter of choice. “In the UK, the National Health Scheme ensures all women are checked while in the US, you cannot renew your medical insurance unless you have been checked”.

There are MTEs at various leading hospitals like Fortis in Delhi and the renowned Tata Memorial Hospital in Mumbai. This year, there are plans to expand the programme to Bengaluru and Kashmir where many women have been blinded in stone pelting.

Shalini Khanna from the NAB Center of Blind Women and Disabilities hopes that will translate into more blind women signing up for MTE programme.

Moblisation is a challenge despite the fact that India has the largest population of blind women in the world. A large part of this is because families are conservative and don’t let blind women come out of their homes. I understand why because life is insecure for blind women. This makes them reluctant to leave their homes and go anywhere as well. – Shalini Khanna, Founding Director, NAB Center of Blind Women and Disabilities

The other big reason, she believes is the limited awareness about gainful employment. “People think bank jobs are the best, although being an MTE is well paying. They start off with Rs 15-18,000 a month and this can go up to Rs 25,000. Besides, you are in a role where you are giving back to the women of the country in a meaningful way.

Truly meaningful when you look at the larger picture in India where mammogram screening is given to women of 40 years and above. This means younger women are slipping the net. “This means we require alternative methods, points out Khanna. “Self-breast exam has been taught but many don’t do it properly and it is hard to reach the deeper tissues. This is a role that has so much scope.