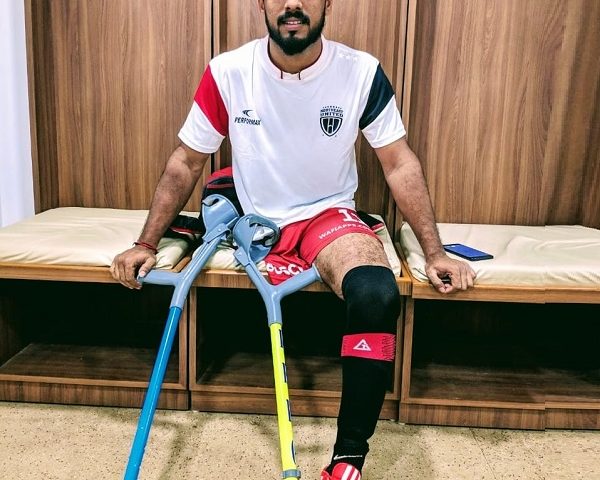 In My Take this week, we have 25-year-old Vysakh SR, Captain of India’s first amputee football team as well as the state volleyball team.

I live in Kozhikode, a small town in Kerala. I was a sports enthusiast from childhood and would never miss an opportunity to attend matches or play games. Football was my favourite sport. In fact, I used to breathe, walk and live football.

Life took a drastic turn when I met with an accident while studying in class eight. During my vacations, I was visiting my relative when I got to know of a football selection camp. I went to attend it with my cousin when a bus hit our bike and I was thrown off, onto the road. The bus ran over my right leg.

At the hospital, I was unconscious for almost a week. I woke up and felt immense pain in my right leg. I remember asking my uncle to massage my leg for me, and he walked out of the room crying. I still did not know what was happening. Soon after, I came to know I had a phantom limb. It took me a while to realise that my right leg was amputated.

Superhero Phantom is a fictional character. But children love and adore it. The name Phantom limb originates from that. You feel that it is there, but it is not.

After my amputation, I was devastated. I was constantly thinking about how I am going to miss playing my favourite sports. Relatives showered me with sympathy and I hated that. Soon I decided to stop crying over my fate and instead make the best of what I had. With the help of friends, I slowly started playing indoor games and gradually began going outdoors on a wheelchair. I began to realise that being an amputee does not mean the end of your life but the start of a new beginning.

I did months of physiotherapy which helped a lot. I used to play football whenever I got a chance. I still remember attending my school sports day and watching other kids run and play. I felt heavy inside and ran back home. As soon as I reached, I tried cycling but fell down and injured myself badly. But honestly, all that did not stop me from chasing my love for sports. I started playing football and in due course of time realised that nothing was impossible.

I did not want to compromise on my education. I completed my graduation in zoology did a course in pharmacy. I also took up sports full-time, starting with volleyball, and went on to become captain of the Kerala team. I used to play football with non-disabled people but realised that India India did not have an amputee football team. I collaborated with a few people to start one.

There are many talented and aspiring football players in our rural areas. But they do not have the opportunity to come out and showcase their talents. I want to provide a platform for such players.

The World Amputee Football Cup is scheduled for 2022 and I want India to win the cup. We have started working on it already.

I love travelling and trekking. I want to visit more places and meet new people. I also want to promote professional football in our villages and small towns.

A lot of people have asked me if I have a role model. Honestly, even a small child inspires me in some way. If the actions or speech of a person hits our conscience in a good way, accept it and try to learn something from it.

Recently, I saw a movie based on the life of a football player. The hero says that legs are the biggest asset to a player. But I believe it is your will-power that makes you a good sportsman. I have seen many amputees who are scared to experiment with sports. Do not hesitate to try out what you love doing just because you have a disability. We all have aims and dreams in life. Work towards it and give your heart and soul to it. Be strong and keep striving until you achieve your goals.

ALSO READ: “My blade are my wings to fly- My Take by Sajesh Krishnan, Kerala’s first blade runner