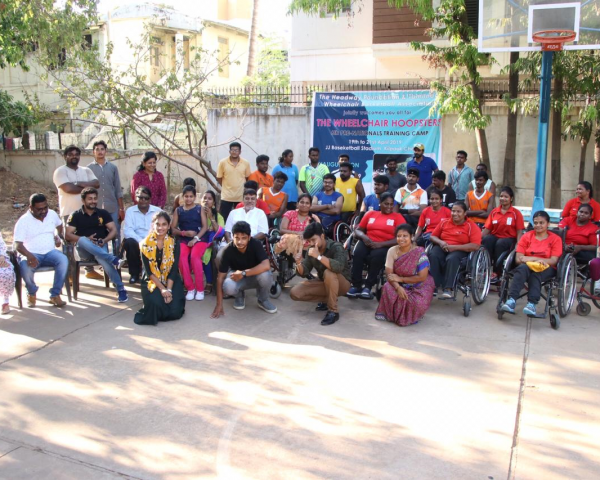 The Sixth National Wheelchair Basketball Championship is starting in Mohali, Punjab from 24 June. Teams from across India have been preparing for this big event for months.

Team Tamil Nadu is among the states that will be represented in the national wheelchair basketball championships. Called Wheelchair Hoopsters, the team from Tamil Nadu has been working tirelessly for several months now. This weekend, they will travel to Mohali, Punjab and are confident of giving their best.

Chennai-based Headway Foundation has been the driving force behind the Tamil Nadu para basketball players along with the Tamil Nadu Wheelchair Basketball Association (TNWBB).

K Raghavi Senthilkumar, Founder, The Headway Foundation, says the national event is a great platform for the team.

In fact the name ’Wheelchair Hoopsters’ for this ambitious project has been coined by the Headway Foundation.

I am very excited about the championship and I am waiting for it to start. I have seen the players work extremely hard and the whole team from Headway Foundation has been involved in making them ready for the games. I am hopeful that the championship will offer them the perfect platform to test their mettle and realise their potential. – K Raghavi Senthilkumar, Founder, The Headway Foundation

A grand send off is being planned for the team on 22 June, “a pre-national bash to wish them luck and motivate them for the journey ahead”, adds Raghavi.

The Headway Foundation has been involved on various fronts, from providing infrastructure, financial aid, support, and training camps.

Malathi Raja, member of the women’s team, is confident of Tamil Nadu’s chances. “This time we have practiced a lot and are hopeful of giving our best performance.

A 20-team contingent will travel to Mohali, including players, two coaches and team managers, four escorts and representatives from The Headway Foundation.

Prakash Rajamanickam is a player and is also associated with TNWBA. He is confident about the team’s chances this time. “We have received support from various sectors and organisations, which has helped us feel stronger and positive”.