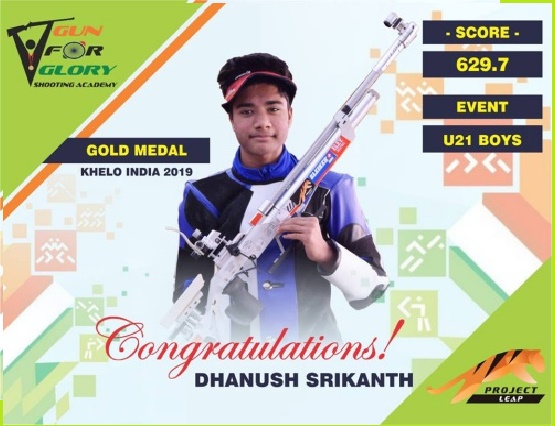 Dhanush Srikanth’s recent performance in the Kumar Surendra Singh memorial shooting tournament has put him in the history books. Read on to find out why.

Sixteen-year-old Dhanush Srikanth has created history by becoming the first hard of hearing shooter to win a national-level medal in the regular category. He finished at number one in the U-21 category of 10m air rifle.

Dhanush scored 252.5 in the junior (U-21) final of the Kumar Surendra Singh memorial shooting tournament held in New Delhi this week. He won a gold medal for this feat and his score is better than the current senior and junior world records. Dhanush followed this up with a silver in the youth category.

This means he has aced the senior world record of 251.2 by Russia’s Alexander Dryagin and junior record of 252.2 by Yuefeng Wang. His mentor, Gagan Narang, a bronze medal winner for India at the London Olympics exulted on Twitter. Dhanush trains at Narang’s Guns for Glory academy under coach Neha Chavan.

What an inspiring win. This guy cannot hear or talk. Smells like teen (team) spirit. Shooting and Dhanush Srikanth are an unbeatable team now. Feels great to play the role of an enabler in his promising journey. – Gagan Narang, Bronze medalist, London Olympics

What makes Dhanush so exceptionally gifted is that he is consistent with his scores. Earlier this year, he clinched gold in the U-21 category in the 0-metre air rifle event at the Khelo India games as well.

In an interview to a newspaper, Narang says it is this consistency that makes Dhanush so remarkable. “It is not easy to shoot such highs cores consistently. He is getting used to handling
the pressure and it is helping him to score well, said Narang.

Dhanush, who was born hard of hearing, hears very little despite wearing cochlear implants and the hearing aid. His coach Neha, sits behind him in the gallery and conveys the instructions of the officials through sign language. His disability has never come in the way of his sporting talent. Even as a child he was interested in sports and started has a black belt in Taekwondo. He started learning the martial art when he was eight years old.

The New Delhi tournament where Dhanush won gold is regarded the second most prestigious competition in India after the national championships. He is also a part of the Narang’s Project Leap Programme where a few talented players are given specialised training.

Narang believes Dhanush’s loss of hearing gives him an advantage as he is more focussed. In an interview to Hindustan Times, he said, the loss of hearing enables him to “channelize his inner feelings which will help him in his shooting. In fact given the series of outstanding performances and ability to understand instructions, Dhanush has now become a contender in the regular category.