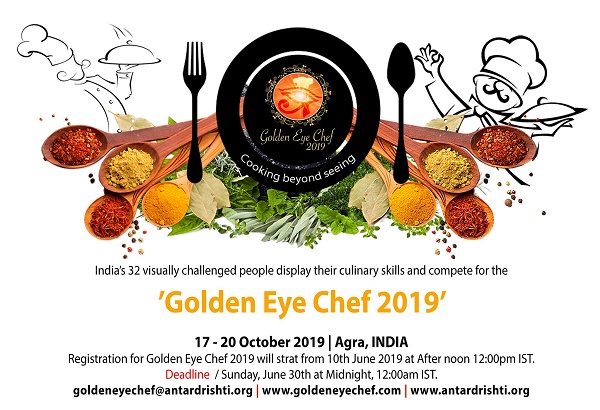 The joy of cooking can be experienced by anyone, that’s the driving thought behind a cooking contest for visually impaired people to be held nationwide soon.

Blind Masterchefs like Christine Ha have shown the world that given the right tools and training, people with visual disabilities can cook and cook well. Now, an upcoming cooking competition aims to give visually impaired people the opportunity to pit their skills against each other.

Called Golden Eye Chef 2019, the cooking contest is an initiative of an NGO called Antardrishti. . The contest is nationwide and will be held in Agra from 17 to 20 October this year. The last date for registering for the contest is 30 June, 2019.

Akhil Srivastava, managing trustee of Antardrishti, hopes to change the outlook of society with this competition.

Most people in society feel that blind people cannot be independent and cook. The Golden Eye Chef competition will bring about the much needed change in the perception of people. It will also help open employment opportunities for blind people and motivate others to seek training in cooking and be independent. – Akhil Srivastava, Managing Trustee, NGO Antardrishti

Sixteen people have signed for each category so far. The two winners will be decided by a panel of judges. The contest is open to anyone who is visually impaired and will be 18 years old on 16 October 2019.

Chef Kuldeep Singh, who is a part of the Jaypee Hotels Training Centre will be one of the jury members and looks forward to being a part of an initiative that will help bring out new talents.

When I got to know about the blind contestants, their talents and abilities amazed me. I am sure that the contest will change the mindset towards people with disabilities.

The organisers are also inviting people associated with the design industry to help develop ideas about creating utensils, gadgets and kitchen designs that are accessible for blind people.