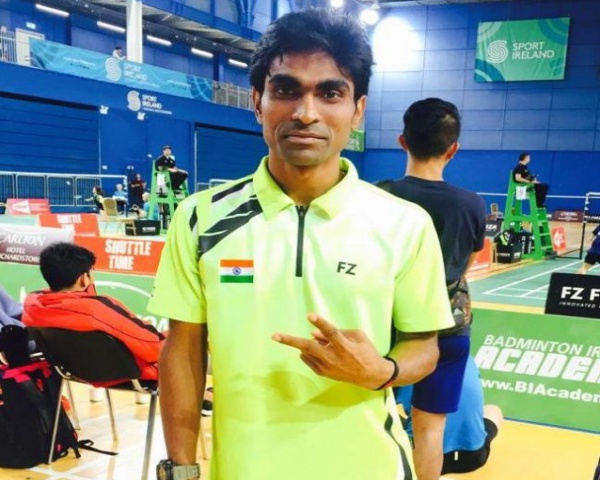 After his sterling performance in Ireland, para badminton champ Pramod Bhagat’s place in the Indian team for Paralympics 2020 is certain. An amazing turnaround given the injury scares he was plagued with until last year.

The win is sweet revenge as Daniel had beaten Pramod in the semi-final of the Canada Para-badminton International 2019 in May.

In the Canada tournament, I was close to winning but I lost the last few points and that really bothered me. So, I came back and worked on my mental strength and was determined not to repeat those mistakes. That training helped me win in Ireland. – Pramod Bhagat, World para badminton champion, SL3 category

Pramod also won the gold medal in the men’s doubles category with fellow Indian Manoj Sarkar.
With this win, Pramod has won the fifth gold medal in a singles event in 2019 for India and his place in the Indian side for Paralympics 2020 seems certain. He won the IWAS World Games 2019 in Sharjah in February, followed by a gold in the Turkish International — ENESCUP 2019 in March, and then the Dubai and Uganda Internationals in April.

India’s chief para badminton coach Gaurav Khanna is especially proud given the injuries Pramod has had to battle with. “His major problem was fitness given the injury issues he had. He has worked hard on that aspect and even during the training sessions, we focused on that. That paid off and at the match it was Daniel who got tired, not Pramod, says Coach Khanna. “This win puts him way ahead of the contenders and he is a sure shot for the Paralympics.

Pramod is also among the five para-badminton players to have been shortlisted by the Mission Olympic Cell of the Sports Authority of India ahead of the Tokyo Games. The 29-year-old credits his coach for his successes.

“I am very fortunate to have in Coach Khanna someone who is a friend as well as a great teacher. We share a good equation and I can talk to him about anything. He gives me great advice. I am happy with this win but have to prove myself in the upcoming world championship in Switzerland. That is the only thing on my mind as of now.

Khanna credits GoSports Foundation for Pramod’s as well as the Indian para badminton team’s incredible success. “Right from organising camps to ensuring we have the proper equipment, GoSports Foundation has supported us in every possible way. These wins would not be possible without their backing”.

Pramod, who is from Odisha’s Bargarh district, was diagnosed with polio when he was five years old. He started playing badminton with senior non-disabled players, proving his mettle by beating them at a district-level competition.

“His biggest strength is that he is patient and calm and that shows in court, says Khanna. “He waits it out for the opposition to show his game and then makes his move. That gives him the edge over others.