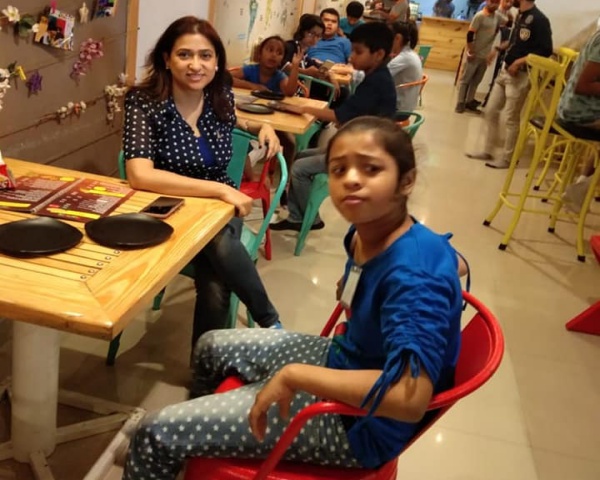 In our final profile in the series #ChangeMakers on principals who are building inclusion in schools, we profile Sonia Jaitley, founder of the Orane School for children with disabilities.

It was when her daughter Udyati was diagnosed with autism that Sonia Jaitley discovered how poorly equipped most mainstream schools are in reaching out to children with developmental disabilities. That triggered the idea to address the gap and eventually led to the launch of Orane Kids School in 2011.

“Orane started off as an evening intervention centre, says Sonia, and “three years later, we decided to launch as a morning school. I found that most schools in Delhi NCR that offered services for special needs kids offered the bare minimum, with bare attention paid to the academic aspect.

While the NIOS opens doors to children with disabilities at class 3, there are many aspects that need to be addressed before any child is ready to take the exam, says Sonia. “Children with autism, for instance, can take the exams but need the writing skills in place before they sit for them.

The academic system in Orane focuses on subjects like Math, Science and English combined with a strong pre-vocational skills training programme. This way children who are not inclined towards academics have other strengths to build on. This is a different approach from many other centres, where the pre-vocational programme typically kicks in when a child is older.

We have five-year-old’s being taught skills like beading and cooking. In a child that young, the focus would be on pre-cooking stages, for instance. Depending where the learners are at, we have specific individualized education programmes – Sonia Jaitley, Founder, Orane Kids School

It is this personalised approach by a team of trained special educators that makes the school such an attractive prospect for parents like Iti Mukherjee, who has a 10-year-old son with mild autism.

“My son has been going to Orane for the last two-and-a-half years. Before that, he was not doing so well in academics and his speech development was poor. In his previous school, I had signed up for a shadow teacher and I found that only she was working with him, while the other teachers neglected him

Iti’s son has shown significant academic improvement after being a part of Orane. He has also cleared the NIOS. “The special educators here are highly skilled, says Iti, “and the education plan is reviewed every three months. This way the children are regularly assessed, and the plans are re-oriented depending on where the child id at.

A student to teacher ratio of 3:1 is maintained so the approach is intense. “If for instance the children are leaning English, the identification of letters happens everywhere, when the child is learning grooming or cooking, adds Sonia.

It was her daughter’s diagnosis that led Sonia to look at training herself to understand the needs of children with autism in an in- depth manner. This meant going back to the books, joining a forum like Action for Autism, even going to Chicago for some important certifications. “I decided it was time to do something more than simply cribbing.

At Orane, you will find children between ages five to 23. They are taught up to class 10. The approach is to build inclusion by engaging with the mainstream and this is done in multiple ways.

“Like, we teach the students’ siblings how to play and engage with them, explains Sonia. “We can keep talking about how society has to integrate but we also have to teach our kids how to integrate. We cannot build these walls and say the mainstream does not care. Our duty to make sure the mainstream understands.

Getting to this point involved much trial and error. Initially Sonia’s approach was to focus on traditional methods until an experience with Udyati taught her to look at the picture differently.

“My daughter is non-verbal, and I wondered often if I would ever have a conversation with my child, recalls Sonia. One day she stumbled across s video on the Internet of a young girl communicating by typing. “I asked Udi if she would like to type out her name and she took my index finger and made me type ‘Udi’ on my computer. I asked her ‘how did you do this’ and she made me type — ‘Have been watching you’.

That experience led Sonia to look at an approach that focuses on children’s strengths rather than weaknesses. “It made me look at my daughter and people with autism in a whole new light. When I asked Udi if she realized that she was different and how she felt about it, her answer was to take my finger and type out — ‘Life, like ways, are up and down.

Sonia passionately believes that children with autism have a whole world inside of them and they are seeking ways to communicate. “They have different networks; you have to be open to discovering those yourself.

ALSO READ:
NewzHook #ChangeMakers are inspiring change where it matters the most