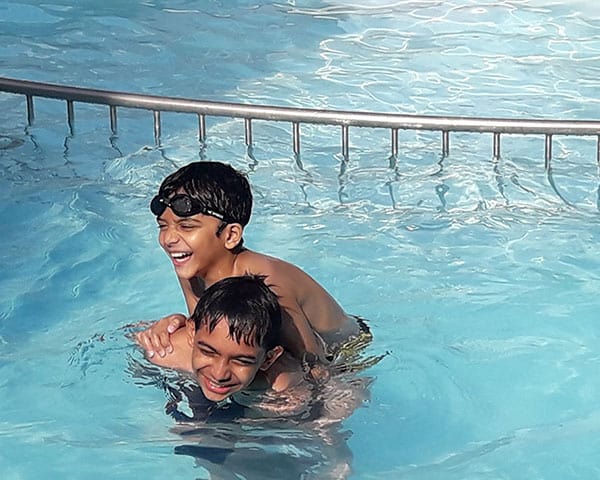 Some great news coming from Dehradun where following the intervention of the Uttarakhand Disabilities Commissioner, a local swimming academy has agreed to allow adults with autism to swim at the same hours as other members.

Members of Arunima, a residential centre for people with autism, can now swim along with everyone else at the Varada Tennis and Swimming Academy in Dehradun.

Earlier this month, there was widespread outrage after the academy told 17 members of the centre to change their hours as their presence was disturbing to other pool members. This was despite the centre paying the entire monthly fee for the lessons and agreeing to the other conditions placed by the pool academy.

Following the intervention of the Uttarakhand Disabilities Commissioner Major Yadav, a meeting was held with Aparna Das, Founder, Arunima Centre and the owner of the pool academy on Wednesday. After this, the academy agreed to let the members of the centre resume their lessons at the timings agreed upon earlier.

Notices were sent to the owner of the pool academy and Arunima Centre and we were called for a meeting. The pool academy owner initially said that he had objected as there were not enough staff members accompanying the adults with autism but that is not true. He finally agreed to let our members resume their lessons until 7 July when the centre closes. – Aparna Das, Founder-Director, Arunima: Project for Persons with Autism

The pool academy owner has asked that the centre give medical certificates for people with epilepsy, which is the norm everywhere. Aparna, who is thrilled with the decision, says the members plan to start going to the pool right away.

There was widespread anger and outrage against the pool academy over the blatantly discriminatory message it had sent out earlier. The Dehradun Disability Forum, an alliance of over 20 disability rights groups in Dehradun had come together in solidarity to make this statement — “Discrimination on the basis of disability is illegal, morally wrong and destroys the very basis of what our country stands for. We believe in an India where every person is equal and enjoys the same rights as anyone else. A petition was also started to protest the pool owner’s actions. There were also calls to file a formal suit for discrimination and violation of the Rights of Persons with Disabilities Act, 2016.

Clearly these statements were successful in sending out the message that discrimination against people with disabilities will no longer be shrugged aside and that the community will speak up, until it is heard.