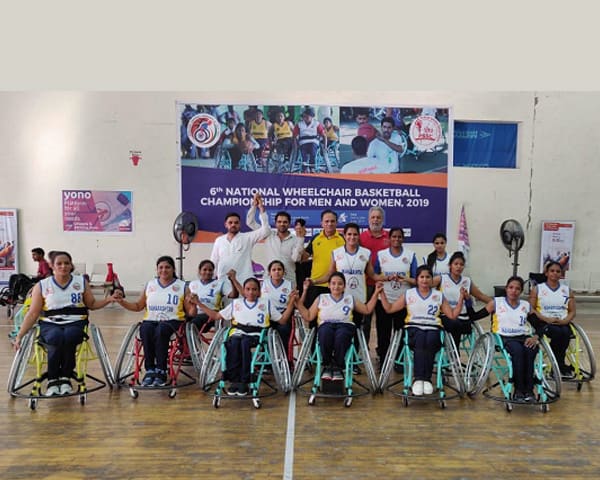 Maharashtra’s women wheelchair basketball team has done it again. For the second year in a row, they are the national champions. The men’s side too lived up to their reputation, winning the national event for the sixth time.

Up against a touch side from Tamil Nadu, the Maharashtra women’s wheelchair basketball team showed some of their best moves on the basketball court at the Sixth National Wheelchair Basketball Championship in Mohali, Punjab. They won the finals, 25-14.

Nisha Gupta, a member of the winning side, called the win memorable. “To win the tournament for the second time feels amazing feeling. I am proud of my team and super excited that the trophy came to us again”. Complimenting authorities for the arrangements made, Nisha said every aspect was taken care of. “The accommodation was nicely managed. We had ramps to move around and the food was also nice.

The event was organised by the Wheelchair Basketball Federation of India and the Department of Sports and Youth Services, Government of Punjab. Maharashtra coach Captain Louis George Meprath was proud of the players and said the win was well deserved given the effort they had put in.

Controlling the wheelchair and moving ahead with the basketball at the same time is a difficult task. Arm strength is of paramount importance in this game, as most players have spinal cord Injuries. This win could not have been possible without the active cooperation, support and involvement of the wheelchair men and women players from Pune and Mumbai. – Louis George Meprath, Coach, Maharashtra Wheelchair Basketball

The sixth edition saw the participation of teams from across India. Around 500 players in both the men’s and women’s categories were present. Twenty-three teams in all attended the championship.

One organisation that has played a key role in encouraging Maharashtra players is the NGO Nina Foundation. Founder-Trustee Dr Ketna Mehta made no secret of her pride in the players.

“Nina Foundation has played a role of creator, nurturer and supporter right from the inception of wheelchair basketball”, said Dr Mehta. “The foundation initiated and been instrumental for key issues leading to formation of our teams, be it organising international camps, providing funding, transport expenses, rehabilitation of young players and motivating them into sports”.

The foundation has gifted 10 Motivation Wheelchairs to the team to help them reach their goal apart from other support.

ALSO READ: It’s all about having the right attitude – My Take by Captain Louis George, Maharashtra wheelchair basketball coach