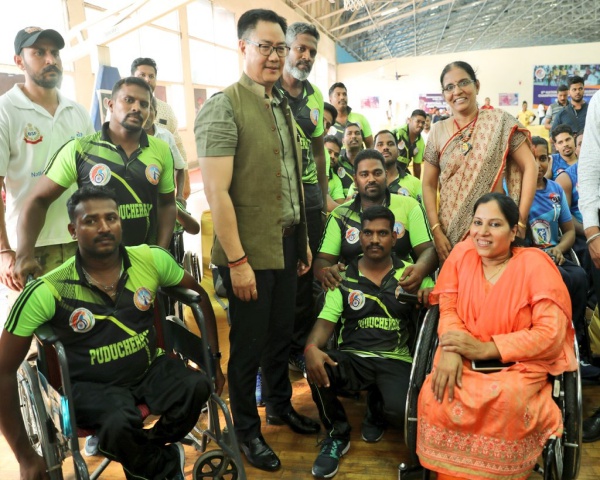 Inspired by the performances of male and female basketball players at the Sixth National Wheelchair Basketball Championships, Minister of State (Independent Charge) of Youth Affairs & Sports, Kiren Rijiju has committed to finally fulfilling a longstanding demand, which is, to make toilets at all Sports Authority of India stadiums wheelchair accessible.

At the end of the championship held in Mohali, Chandigarh, Minister Rijiju tweeted, “I have asked for arrangement of toilets for wheelchair athletes and visitors at all Sports Authority of India stadiums.

A petition demanding this had been moved as far back as 2016 by disability rights activist Dr Satendra Singh. Three years later, the minister’s tweet has renewed hopes that this will finally see some action on the ground.

“At Mohali, the washrooms were accessible but only to a few people like me who use smaller wheelchairs, says Nisha Gupta, member of the Maharashtra Women’s Wheelchair Basketball team, which won the nationals for the second year in a row. “There were many people in bigger wheelchairs who could not even enter the toilets. It was very hot there and we were drinking a lot of water and needed to use the toilets frequently, so this was a real problem.

Sentiments echoed by Mohammed Shams Alam Shaikh, champion para swimmer. Last year, Sham had to forego the opportunity to attend the national coaching camp for the Asian Para Games held in Bengaluru as the toilets at the Sports Authority of India venue in Bengaluru were inaccessible.

Alam was among the first to respond to Rijju’s promise. “We para athletes always face such issues in daily life and at various championships. Accessibility is the need of the hour.

The minister’s announcement is being seen as a sign that wheelchair sports will finally get the encouragement it needs from authorities. Dr Ketna Mehta of the Nina Foundation hopes that this will translate into a greater understanding of the struggle para sportspersons go through.

It is extremely heartening to know that the Union Sports Minister recognises that for wheelchair sports to flourish, there is a need for greater understanding of how athletes on wheelchairs go about their activities of daily living, including the need for universally designed washrooms for independence. So far, the onus has been upon athletes along with the women team managers, physiotherapists and family escorts. – Dr Nina Mehta, Founder-Trustee, Nina Foundation

Despite facing many barriers in funding, training, equipment and accessibility, India’s para athletes have done incredibly well in national and international level events, says Dr Mehta, whose organisation is playing a key role in enabling many wheelchair athletes achieve their peak potential.

“Our players are so full of potential that last year they won the nationals with extremely difficult infrastructure of daily living, only because of support and help. This is only a part of the struggle and lots more need to be understood and implemented to get our wheelchair players soaring on the international arena too.