Black Barbie on wheelchair is an Internet sensation 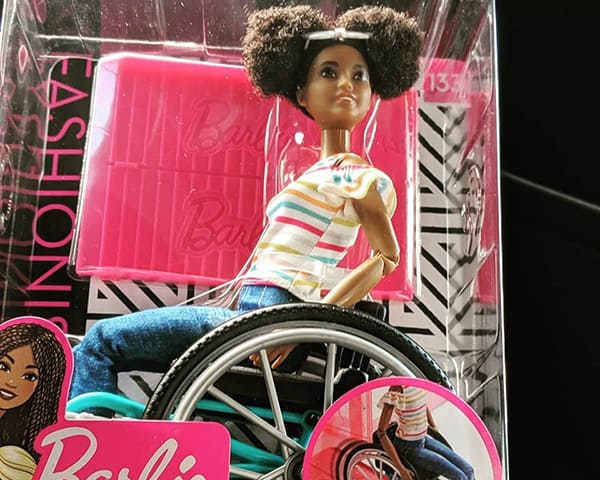 Recently, American company Mattel Inc., that makes Barbie dolls, launched a new black Barbie on a wheelchair. This is going viral on social media with people appreciating it as a step towards inclusion.

Barbie dolls, with their logic defying body measurements are a favourite among many young girls. Mattel Inc., the company behind the range, are often called out for their sexist portrayals. For a change, they are in the news now for good reasons.

Their latest launch, a black Barbie in a wheelchair, has won them bouquets for promoting inclusion. While Mattel has launched Barbies on wheelchairs before, they were discontinued as the wheelchairs did not fit into dollhouses. This time, there are wheelchair ramps so that issue has been addressed.

Priya Bhargava, winner of Miss Wheelchair India 2015, is happy with this gesture.

I appreciate this initiative from Mattel since it is giving a strong message about inclusion and sensitivity towards people with disabilities. I wish more companies come forward to create inclusive toys because this is a great way of reaching out to the younger generation. For instance, an elderly Barbie who uses a walking stick and is being cared by a younger Barbie would send out a great message. – Priya Bhargavaa, Miss Wheelchair India 2015

The dolls are already available on websites like Amazon in the United States. Will there be a formal launch in India? Well, that’s not so certain. Visually impaired beauty pageant winner Simran Chawla certainly hopes so.

“This is one of the best things that I came across the internet today. Early childhood is when we learn a lot of new things. So when such inclusive toys are included, it is great. We are sensitising children about disabilities at the right age. I hope more companies follow suit and create toys with all kinds of disabilities, says Simran.

“#Barbie has a new doll! She’s Black, wears naturally curly hair, and in a wheelchair. This is the representation children need to see. THIS is inclusion! #BlackGirlMagic #DiversityMatters, tweeted Angela Rye, a media person in the US.

Another tweet said this was a face of Barbie that was long overdue. “I grew-up loving Barbie, when she didn’t look like me. Encouraging to see not only a version of the iconic doll w/natural hair, but also w/a physical challenge. Barbie is me! The first black Barbie to use a wheelchair is here, tweeted Clayonia Colbert Dorsey.