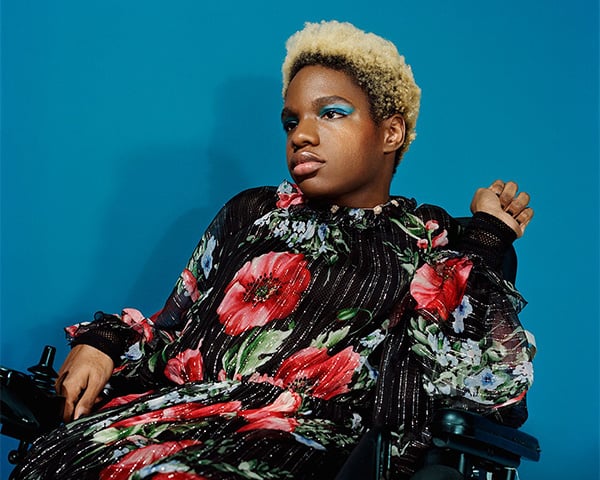 Aaron Philips, a disabled and black transgender person has beaten all odds to be featured in the cover of Paper Magazine for Pride Month in June. Aaron’s journey is being cited by many people as an inspiring and motivational example of people overcoming different barriers to be successful.

June was celebrated as Pride Month across the world. Members of the LGBTQ community came together to showcase true love irrespective of all barriers and stigma. For American model Aaron Philip, June was extra special.

Aaron, who was diagnosed with cerebral palsy as a child, has beaten many obstacles to find and express her true identity. This black and transgender person was featured on her first magazine cover for Paper Magazine. The 18-year-old’s journey to fame and limelight is quite inspiring.

Aaron was featured with none other than top model Naomi Campbell who called Aaron her hero. What more would a beginner need! This youngster, who signed up with leading modelling Elite Model Management last year in September, landed her first cover in a remarkably short time. A social media star with over 100,000 followers, Aaron’s inspirational posts and stunning photos are not to be missed.

Jijo Kuriakose is the founder member and president of Kerala-based Queerela, an organisation that works to empower the LGBTQ community. He sees Aaron’s story is a reminder that the inclusion of minority communities is vital for progress of India.

Disability as a matter of inclusion is yet to gain active discussion in the Indian context. I feel great joy seeing a black transperson who is disabled creating a visible impact in society. I recently saw the Malayalam movie Uyare which highlighted the struggle of a woman pilot who was an acid attack survivor. I hope mainstream media discusses and focuses more on practical options to broaden inclusive spaces for marginalised groups like LGBTQ community and disabled people as well. –Jijo Kuriakose, Founder-Member & President, Queerela

Aaron who hails from Antigua, moved to the United States of America with her family when she was hardly three years old. Her love for modelling took off when she was 17. She decided to take it seriously and since then there has been no looking back. Aaron has been featured in leading magazines like Teen Vogue and ASOS to name a few.

Aaron claims that modelling is a space to prove her skills and showcase to the world what she has. But more importantly, it is a space to work on inclusion. Just like her, there are many people from across the world from minority communities who would love to showcase their talents but are not given a platform. Aaron hopes to inspire such people. At various interviews, she has told how people need to beat obstacles and clear their paths to work on equality and inclusion in the fashion industry.

“I came across Aaron Philip’s inspiring story and it is great”, says Rajashree Raju, a member of Queerela. “I hope that she is not merely made into a poster girl for promotion of inclusion during pride month. Instead, she must be given opportunities throughout the year. The model management company must also be serious about hiring people from minority communities to promote inclusion to the fullest.

Aaron’s works are already being noticed in the fashion industry. Hopefully, this young girl is going to take the industry by storm in years to come.

ALSO READ: ‘We are all disabled in some way’ – Nninja Singh, founder of India’s 1st inclusive modelling agency