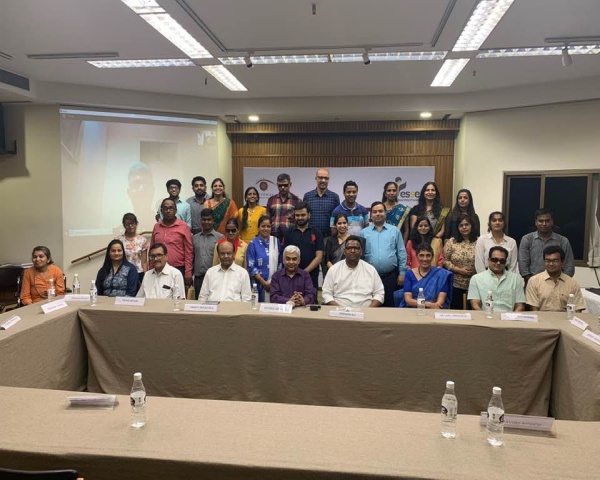 According to the World Health Organisation, India has a blind population of 63 million. A substantial number lose their vision late in life and the consequent trauma is something that, leave aside families, even the medical fraternity is not equipped to address. That’s our focus on Story of the Week.

Until 2017, life was going as expected for Praveen Shankhdhar . An art director in an advertising agency, Praveen was in his 30s, married with a child. Then he started losing his vision due to glaucoma.

“I started treatment and my family rallied around me at first but after some time, they all left me, says Praveen. “It was a terrible time as I struggled on many fronts. The treatment exhausted my savings and was coping with drastic physical changes and battling depression.

Luckily for Praveen his friends stood by him and organised his treatment at a Chennai eye centre. “I landed there all alone and found my way to the facility where I stayed for 10 months. I had to learn how to fend for myself.

Praveen’s is not a rare instance. Instances of late blindness, say experts, are rising in India with a growing number of people seeking help. This prompted well-known non-profit Score Foundation to organise a roundtable conference to raise awareness about the challenges they faced.

There are many people who lose sight later in life when they are 35-40 years old. There are psychological issues they face, there is lack of awareness and acceptance. The aim was to capture the challenges people with midlife blindness face in terms of anxiety, resources, family responses, etc. — George Abraham, CEO, Score Foundation

One of the main challenges is the lack of adequate data on cases of midlife blindness in India. Empirical evidence strongly suggests the need for a survey as Soniya Srivastava, Faculty Optometrist, Dr Shroff’s Charity Eye Hospital, New Delhi points out.

“We see five to six cases of late blindness every week, most of them people in the late 30s and early 40s. Most of these are cases of retinitis pigmentosa. “They know they have RP but have not been told by their doctors that they could lose sight, says Sonia. “If they were made aware, and counselled in advance about the challenges, the trauma faced would be much lower.

Coming to terms with the situation late in life can be traumatic. especially for those who have been told their vision would improve later. Renuka Bhagat, among those who spoke at the session said, “I had retinitis pigmentosa and am a late blind person. I kept waiting for a day when there would be surgery options available and I would be able to prevent this eventuality. When she realised this would never happen, she was shattered. “I spent nearly four years at home, crying, doing nothing. It was the darkest period of my life.

For Renuka and Praveen, hope did dawn when they found support from organisations. In Praveen’s case, it was the All India Confederation of the Blind (AICB). For Renuka’s case, it was the NAB India Centre for Blind Women and Disability Studies in New Delhi.

“The AICB made me realise I could lead a normal life, says Praveen. “I got my confidence back. I understand that as a blind person there are drawbacks, but you can do something if you believe in yourself.
There are countless others who are not as fortunate. “In parts of semi-urban and rural India, there are people who spend 20 years in the dark, as Shalini Khanna, who has surveyed 430 blind schools across India reminds us.

“There are blind boys in places like Ballia, Uttar Pradesh, who are bright and committed but have not been able to get an education, says Shalini who is the Director, NAB India Centre for Blind Women and Disability Studies. “Don’t even ask about blind girls and women. There is just one school for blind girls in all of UP. The state of healthcare is also an issue. “Doctors don’t know about life after blindness, she adds. “They keep giving hope that things will get better and then suddenly after years the families are told the sight will never improve.

This coupled with poor implementation of laws throws up a set of formidable challenges.

George cites the cases of Rajasthan postal department official Narhari Thakkar and Yashpal Chhabra of the Indian Railways. Both lost their vision late in life and faced discrimination at the workplace. “They were isolated at the workplace and despite acquiring the skills needed to continue doing their jobs after losing sight, they are still not given assignments despite the RPWD Act. It is strange, he points out, that a “government that is supposed to be invested in including us is not helping visually impaired people continue in the mainstream.

Some of the key takeaways to address the challenges of midlife blindness said participants at the conference was the need for data so late blind people can be directed to rehab programmes, more psychological resources to cope with the trauma, skilling and training programmes for middle-aged visually impaired people and greater awareness among employers, government officials, family members and caretakers.