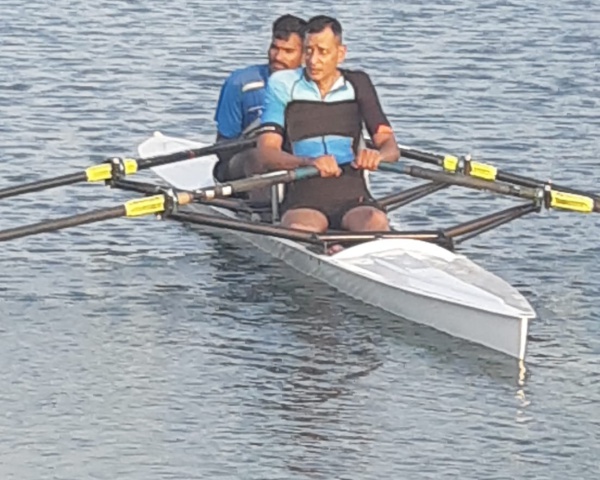 India will make its presence felt for the first time in an international para rowing event in South Korea. Among the rowers from India is Wing Commander Shantanu, whose miraculous comeback after he was paralysed a bike accident has made everyone take notice.

With just three months to go for the World Asian Para Rowing Competition in South Korea, Wing Commander Shantanu is training hard. Shantanu will make history as one of three para rowers to represent India for the first time at an international rowing event and he is leaving no stone unturned to put the country on the map.

In the midst of intense preparations, a major morale booster has been a tweet from the Indian Air Force IAF acknowledging Wing Commander Shantanu’s storybook recovery from the bike accident that left him paralysed in early 2017.

Shantanu was on his way to work at the base in Hasimara, West Bengal, when his bike skidded and fell into a ditch, paralysing him below the chest. He was in a coma for many months after which he was flown to the Military Hospital in Pune for rehabilitation.

His amazing recovery got him noticed by B S Dhanoa, Chief of Air Staff, who sent him a commendation letter a few months ago. Now comes a tweet from the IAF celebrating his successes. Praising his determination and will power, the tweet said Shantanu symbolised the ‘never-give-up’ attitude of an Air Warrior.

The tweet by the IAF reads — “#NeverSayNever : Wg Cdr Shantanu, a gold medalist at an event organised by Paralympic Swimming Association of Maharashtra is now eyeing the Para Rowing Competition to be held in South Korea in October. Due to his determination & will power, he has overcome all odds.

Speaking to NewzHook , Group Captain Deepak Ahluwalia, Secretary Air Force Sports Control Board said Shantanu’s journey is a sign that if there’s a will, anyone can touch the skies.

Wing Commander Shantanu has excelled at a sport like para rowing where few Indians have reached and I am sure he will come out with flying colours. He has shown to the world the true spirit of an Air Warrior, that if there’s will and determination, anyone can reach for the skies. – Group Captain Deepak Ahluwalia, Secretary Air Force Sports Control Board

Shantanu is happy and grateful for the encouraging words and plans to live up to the words – touch the sky with glory.

“I am rowing eight kilometres every morning for four hours and will increase this gradually. I am also building my stamina with weight training”. Shantanu puts in eight to 10 hours a day on preparation, taking Sundays off to rest. “Currently, I am focusing on muscle endurance under the guidance of renowned coach Ismail Baig and Inderpal sir“.

Standing by him to keep his mental strength high are his core support team of wife Sujata and Colonel Gaurav Datta. It was Colonel Datta, India’s only para triathlete, who motivated Shantanu to take up para sports when he was feeling down and out at the Pune hospital.

The IAF says it is prepared to offer him support. “We are certainly there to support them and will give him whatever he needs, said Group Captain Ahluwalia.