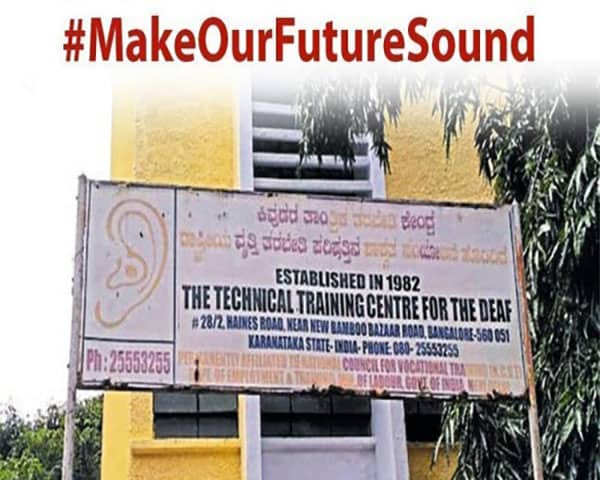 There’s growing anger over the move to demolish a training center for deaf students in Bengaluru. An online petition seeking their rehabilitation is gathering support.

Sixty-five youth who are deaf and hard of hearing have nowhere to go with the Bangalore Metro Rail Corporation Limited (BMRCL) determined to go ahead with its plan to demolish the The Technical Training Centre for the Deaf (TTCD) at Shivajinagar to make way for a Metro station.

The TTCD has been a lifeline for poor deaf students not just in rural Karnataka but villages in other states in south India for nearly 40 years. An online petition, initiated by Pooja and Namrata Sharma highlights the injustice of throwing these students out with no alternative offered. “BMRCL might see the centre as a useless wreck, but it is a home to 65 special kids with speech and hearing disability…If it wasn’t for this centre, these deaf children would end up on the road, making them vulnerable to all sorts of crimes”, reads the petition.

An appeal that until now appears to have left authorities unmoved, but is attracting anger and outrage from different quarters. Among them is the well-known disability rights advocate Rupmani Chhetri, who says that shutting down TTCD will be an unjust denial of opportunities to deaf students.

I have been to the TTCD for Deaf training and they are interested in leaning technical knowledge and joining companies. Deaf students need to learn technologies related to water pumps, bikes, etc. They have dreams and aims in life and if they get such training they will find job for themselves. It is because the deaf community has no access to technology that we end up becoming consumed with ourselves. – Rupmani Chhetri, Disability rights advocate

Ahmedabad law student Maitreya Shah is also among those backing the petition. “The authorities are apparently saying the lease has ended but some other arrangement has to be made for these students. The authorities at the training centre must push back but I am not sure that is happening, says Maitreya. He adds that the Metro station is not even being built at the school premises. “The information was have is that the school premises are to be used as a garbage dump or for some supplementary purpose. They cannot just ask so many children to go without offering alternative facilities.

Speaking to the newspaper The Times of India, a BMRCL official said the TTCD was built on land given to an NGO on a 99-year lease and that the lease holder has sub-leased the land in violation of the agreement.

The online petition also refers to media reports that the centre lacks basic equipment and that the teaches haven’t been paid for months, leaving students with the onus of making it a safe home. “They have arranged some food from the ISKON temple, teachers are still teaching without salary because they care and know that these kids have nowhere to go, says the petition, called #MakeOurFutureSound.