A YouTuber by chance, Husna Ameen proves disability is no barrier to pursue dreams 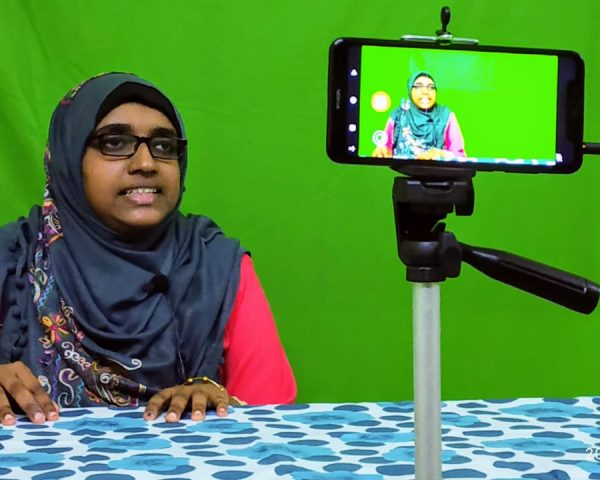 27-year-old Husna Ameen from Trivandrum is a computer trainer. She recently started a YouTube channel ‘English Insights with Husna’ which is garnering attention. Husna shares her inspiring and motivating story.

A disability could not stop 27 year old Husna Ameen from pursuing her dreams or ambitions. Visually impaired from childhood, Husna is a true inspiration. This youngster has beaten all obstacles on her path to complete a post-graduation and even B.Ed to become a computer trainer. Now, she is busy running her YouTube channel English Insights with Husna which has nearly 600 subscribers and 27 videos. Husna shares her journey of grit and determination to chase her passion.

Raised at Trivandrum, the state capital of Kerala, Husna lost her father at a young age. Her family comprises of her mother and two younger sisters, both of whom are visually impaired. Owing to her busy work schedule, Husna’s mother Bushara Beegum did not mostly have the time to look into her children’s studies. But this strong mother trusted her daughters to excel in what they are doing. All of them are well qualified and pursuing their ambitions. Husna, being the eldest, was the perfect role model for her two sisters as well. She completed her schooling to do a post-graduation in English literature and even completed a B.Ed course to become a teacher.

Husna recollects that she studied in a regular school, but did not have any idea about technological devices that could make education easier for her.

I was unaware of talk back devices or screen readers. My school was supportive, but I had to learn from what was being told in class. In fact, I did not even know how to use smart phones or computers and make the best out of it. My life changed after I completed a one year course in B.Ed to join the ‘Insight’ project run by Kerala government’s social justice department. It was indeed a stepping stone for me-Husna Ameen.

Husna started learning more about computers at the Insight Project. Gradually, her trainers asked her to conduct classes for juniors which Husna says helped her a lot. “There was occasional vacation classes that happened at the centre. I was being paid for the daily work that I do. This increased my confidence and I started training many youngsters”, says Husna.

She completed her post-graduation with the help of technological devices which she learnt to operate from experts and trainers at ‘Insight’. “I completed my post-graduation course using screen readers and talk back devices which was of immense help. In fact, I typed out my entire project using these devices”, says Husna, who even passed her National Eligibility Test (NET) in the year 2017.

During one of her interactions with support group Koottu in Trivandrum, Husna realised that social media can do wonders and in fact, be a great source of income.

“My friends often tell me that I have the ability to convey messages rightly and explain things in detail to people. I decided to tap on that skill and started a YouTube channel for people who are appearing in competitive exams”, says Husna.

Her younger sister helps Husna to shoot the videos on mobile camera and then they edit it with an app on phone. Husna’s videos are done in both English and Malayalam. Aspirants for competitive exams like IAS and IPS must check out her informative videos! They are made for people are visually impaired as well.

“This is a new area and I’am exploring the many possibilities in this. I hope that I can start earning from this social media venture. I need 4000 watch hours and at least 1000 subscribers to get paid. So I’am working on it”, adds Husna.

Husna believes that learning and teaching English can bring many job prospective. So she doesn’t want to leave any stone unturned to ensure that she excels in English.

“I always wanted to become independent and do something on my own. I have attended many interviews but did not have any luck”, she says.

Husna points out that discrimination towards people with disabilities is quite common, especially when it comes to hiring them for jobs. “Disability is definitely a huge factor in being able to progress. We have to strive hard and work towards creating a mark in society. It is also a matter of self-respect and satisfaction. So finding a job is extremely important. Being independent is a great feeling”, says Husna.

Currently, she is focusing on improving her YouTube channel, and wants to spread the message to wider platforms.

Husna’s mother Bushara Beegum says that her children have always made her proud.

“From the start, I have told my kids that education must be priority, whether you have a disability or not. Many people pulled me back pointing out that they are girls who must get married off. But I was determined to cross hurdles to educate my children. Today, when I look at them, I’am extremely proud and happy for their achievements”, says Beegum.

ALSO READ: ‘Think beyond & work towards your goals’ – My Take by Kartik Sawhney