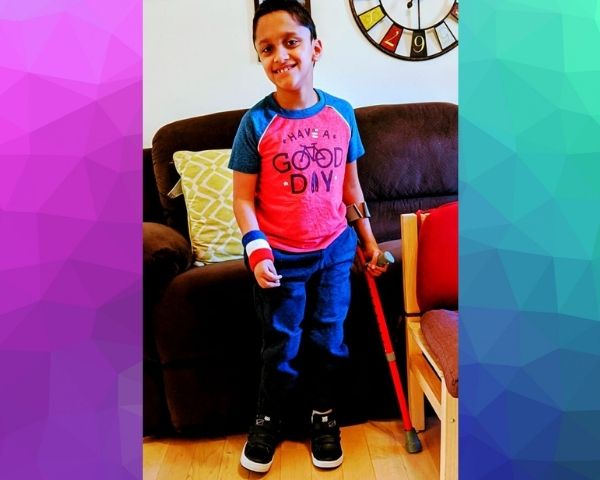 In our November campaign #FutureChamps, today we feature nine-year-old Aaditya Sajith Menon who was diagnosed with cerebral palsy and ADHD. Aaditya lives in the United States with his parents. An ardent fan of music, video games and movies, this young champ loves to play harmonica and has performed at various venues.

Born as a premature baby at 28 weeks and weighing only 600 grams, Aaditya Sajith Menon has been a real fighter as soon as he stepped into the world. More than his fighting spirit, it is Aaditya’s positivity that what would strike any person on their first interaction with him. This nine-year-old was diagnosed with cerebral palsy and ADHD and is currently studying in class three in a town called Newton at Massachusetts in the USA. Since past two years, Aaditya has been learning to play the musical instrument harmonica, something which calms him down and makes him happy.

Aaditya’s mother Megha Menon remembers delivering him and tough days soon after. “He had a long Neonatal Intensive Care Unit (NICU) stay of three months. Aaditya was on oxygen support in the NICU when he once had a cerebral hemorrhage that affected right side of his body. He was diagnosed of cerebral palsy”, says Megha. Amidst all the stress, Aaditya’s smiling face is what made Megha and her husband the happiest!

Though the family originally hails from Kerala, they have been settled in the USA for a while and there was a reason to it. “My son was born in Bengaluru because my husband and I were working in the city at that time. I quit work after he was born and my husband continued to work with Akamai. Their Vice-President from Boston happened to visit Bengaluru office and his daughter too has cerebral palsy. He suggested moving here for Aaditya’s treatment and schooling. That is how we got here. It just seemed like destiny’s plan”, says Megha.

Currently, three of them with their pet dog Knuckles makes up the happy family. “Fortunately, my mother visits us every year and stays here for six months. Aaditya is connected to his roots”, says Megha.

Some doctors told Megha that Aaditya wouldn’t talk due to this condition. But the family was not ready to leave it there. Megha used to talk, read and sing for him. “I’m the musical person in the family. He spent most of his time with me. So that was an easy influence”, she says.

By the age of three, Aaditya started talking and even used to hum songs. “So I started teaching him words of songs and he sang that all day. Now he is formally taking western voice lessons. We’ll start Indian music in some time”, says an excited Megha.

Due to his condition, Aaditya is able to use only his left hand. So Megha started researching about any musical instrument that can be played with one hand. That is how she zeroed in on harmonica. Aaditya started formal lessons for Harmonica two years back and still continues them. “He performs at schools and local clubs here but he has never played at any competitions. We do not want to pressurize him but rather have him enjoy the process”, says Megha who vouches for music therapy. “Music lights up Aadi. I feel music opens up a new world for him where he can express more than words. Music has helped with his communication and social skills too”, she adds.

Needless to say, Aaditya wants to pursue music and in the future wants to become a DJ!

Megha once asked Aaditya who his role model was and tap came the reply, “I want to become like my dad”, he said.

“He aspires to be hard working and helpful like him. His celebrity role model is Malayalam movie actor Aju Verghese. In fact, he was kind to call us and talk to Aaditya. It is a beautiful relationship that he has with the actor. In his imagination, Aju lives with us and Aadi talks to him and shows him all his stuff. It’s like Aju Verghese is his secret Santa”, says Megha.

Aaditya loves reading comics, playing video games and watching comedy movies of his favorite actors. “But I have to say out of the 12-13 hours he is awake, about 6-7 is music”, says Megha adding, “As a parent, we could not be more proud of him and his achievements in music. Since he has ADHD, he cannot concentrate much at school. Pressurizing such children to study will have negative effects. It is important that we encourage them to do what they like. For Aaditya, it is music and we will support it all his life. I’m certain he is going to make it big in the future. Music heals and opens doors we didn’t even know existed for these children with special needs. I don’t like to call him disabled. He is specially abled”, says Megha.

Over the years, Aaditya has had over seven surgeries and seven years of therapy. He started using crutches at the age of seven. So from being written off by doctors as a boy who wouldn’t be able to talk or walk, Aaditya has come a long way already. “Nothing is impossible and miracles happen to those who believe”, says Megha who is the strongest pillar of strength to her son.