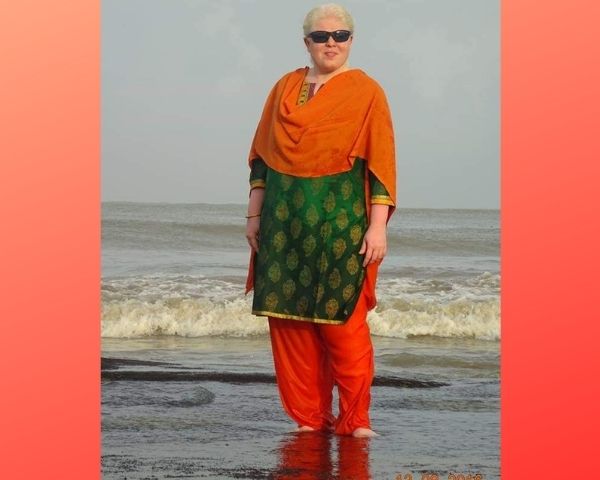 In our series #CelebratingGirlPower, today we have 40-year-old Aahuti Dhandhukia from Gujarat. Aahuti, who was diagnosed with albinism and low vision works as an assistant professor at the Government Engineering College in Bhavnagar. She says that every disabled person must find ways to empower themselves.

Aahuti Dhandhukia, 40 years old, was born and raised at Bhavnagar in Gujarat. Soon after birth, she was diagnosed with albinism due to which her skin and hair are extremely white in color. The condition is caused due to lack of melanin in the body. As a result of albinism, Aahuti has low vision too. Life was not a cake walk for her. But she has overcome many odds to become a successful and independent woman. She works as an assistant professor in English at the Government Engineering College in Bhavnagar.

When Aahuti was born, her parents were shocked, especially her father. It was her mother who accepted the disability first and then helped her father. “My mother had actually come across people with albinism, but my father never did. So it took him a while to accept my disability, but he gradually did”, says Aahuti whose sister was also diagnosed with the same condition.

When Aahuti had to be admitted to school, doctors and people close to the family suggested that she goes to a blind school. But her father was adamant on sending Aahuti to a regular school. “He said my daughter only has low vision and she isn’t fully blind. So she must sit with other students and study. Admitting me into a mainstream school was the best and wisest decision that my parents took”, says Aahuti who says she was educated in one of the leading institutions in Gujarat state. Though school officials were initially skeptical to admit her, they finally agreed to.

Not just in academics, but Aahuti was an all-rounder in everything. She had a lot of support from her teachers and friends too. “I have come across many kids with disabilities who have had a tough time in mainstream schools. I was lucky to have great people around me”, she says.

Aahuti’s mother wanted to make sure she gets the best education. So after working in a bank, she used to attend classes to teach Aahuti and her sister. “She has struggled a lot to make sure that we pass out in flying colors. The sacrifices that she has made cannot be put down in words”, says Aahuti who was amongst the top ten winners in Bhavnagar district for class 12 exams.

Education was a priority at the Dhandhukia household. Aahuti was brilliant in mathematics. But due to low vision, she did not want to take chances so opted for English literature when she joined college. “English was also something that I loved. College was fun and I used to take part in many programs. My days in college helped in my personality development too”, says Aahuti who completed her under and post-graduation in English literature.

She also completed a B.Ed course so that she could get into the teaching profession, something which was close to her heart. Aahuti has won the best student award at college.

“I was an avid reader. So I used to spend a lot of time in the library. College life was a golden period. It helped to nurture my potential”, she says.

Aahuti got through the Gujarat Public Service Commission exam in merit list. She also got the first rank in the translator job with Gujarat government.

“I always liked teaching. I was empathetic, understanding and patient. These are the prime qualities that I believe any teacher must have”, says Aahuti who has also worked at the Gujarat Secretariat for a brief stint. Her current job as an assistant professor gives her immense joy. She has been working in the college for ten years now.

“I have lived with the burden of proving myself, but thankfully I had financial and social support unlike many other people with disabilities. I know many who try hard to prove themselves. Do not think that your disability is a burden. Do what you like and make sure to empower yourself. You must be wise enough to take decisions for your own. Keep your head and spirits high”, says Aahuti who is currently doing a research in disability studies. She has spoken at various national and international conferences too.