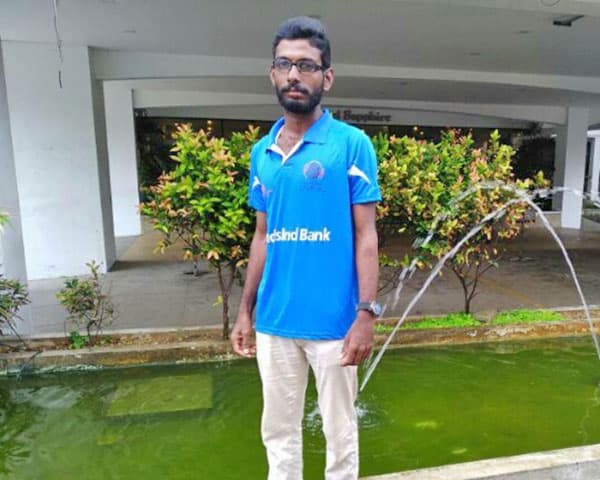 Abdul Munaz, captain of Kerala’s blind cricket team, cuts an inspiring figure even off the cricket field. Abdul played for the Indian team at Sri Lanka in 2018.

Just like most youngsters his age, Abdul Munaz was mad for cricket as a child. Born fully blind, he regained some of his vision after many surgeries. There was no stopping Abdul who embraced all sports but cricket held a special place.

Since he comes from a small village in Kasargod,, Abdul did not have the resources or chances to experiment with his game. He moved to Kozhikode in search of better opportunities and met with experts in the field. With consistently good performances he gained a reputation as a solid player and was appointed captain of the Kerala Blind Cricket Team.

Blind cricket is different from mainstream cricket. Even today, there is no awareness about blind cricket and people do not know the struggles that we go through. But I believe the scene is changing for good. People from the disabled community are stepping forward to try out para sports. I have underwent numerous struggles to chase my passion, but I am glad that I did it. Cricket has always been close to my heart-Abdul Munaz, Captain, Kerala blind cricket team

Abdul, who is 23, is studying at Kozhikode along side playing cricket. He attends cricket practice sessions twice a day before doing yoga and hitting the gym.

Abdul says his first brush with cricket was in 2010 as a class 8 student. Initially he was unsure whether he could play given his disability but he tried nonetheless. He was studying at the Kasargod Blind School at the time and got ample support from his teachers and staff members. Later he joined the Kerala Cricket Academy and also became a part of the Cricket Association for the Blind in Kerala where he met many young talented blind cricketers. Abdul’s love for cricket took wings after he joined Samarthanam Trust for Disabled where doors of opportunities opened for him. There has been no turning back since then.

“For someone like me who hails from a small town, cricket helped increase my confidence and character building. Many people have guided me throughout my journey, and I’am looking out for more opportunities”, he says. This youngster, who is also the captain of the Kasargod blind cricket team entered his district team in 2010, then the Kerala team in 2012 and in 2018, played for Sri Lanka.

Abdul received no support from his family who dissuaded him from becoming a cricketer but he stuck to his guns. “I wouldn’t blame them because even today there is no awareness about para sports in our society. Just like any other family, even they were worried if I can earn a job or whether I would dedicate all my time to playing cricket. But I was determined to play cricket”.

In spite of the many day to day struggles and financial constraints, Abdul hopes to play for India. Some government support he says would help. “We need to look out for education or job opportunities to sustain. It is high time that the public also supports us. When other countries get so much support, why are we left behind? I believe that if you love something, you must really go behind it. Nothing is impossible”.

Rajnish Henry, Senior Vice-President of Cricket Association for the Blind in India believes Abdul’s passion for the game is inspiring. “He is very passionate about the game and takes efforts to ensure that he puts a lot of hard work into it. This constant effort is what is important for the success of a sportsman, and that is his biggest positive as well”, says Henry.