Aspiring songwriter, Abhijith Soman believes his creative skills can take him to heights 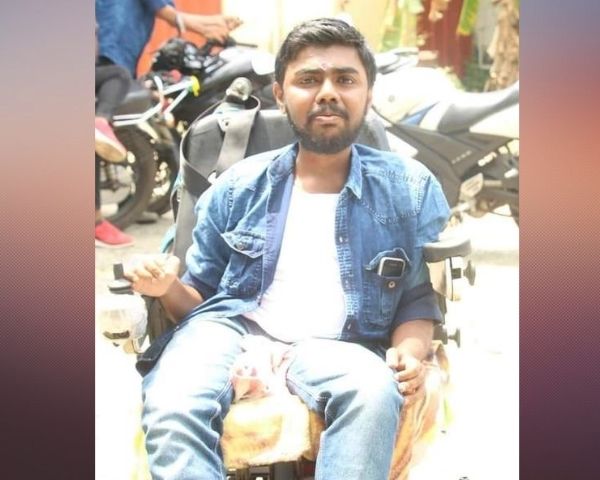 Abhijith Soman from Alappuzha in Kerala was diagnosed with Spinal Muscular Dystrophy (SMD) when he was around five years old. A song writer, Abhijith hopes to work on his creativity and even build a career. He talks to Newz Hook about how he has emerged happy and peaceful amidst many odds.

Abhijith Soman, 24 years old, is from Alappuzha, a town in Kerala. A wheelchair user diagnosed with Spinal Muscular Dystrophy (SMD), Abhijith is a song-writer who is experimenting with his skills. One of his songs have already been released on YouTube for which the music was composed by Abhijith’s friend. This youngster hopes that all his dreams are fulfilled, but needs support for it. Abhijith’s world comprises of his family, a bunch of great friends and of course, songs and hopes.

A walk down the memory lane

Abhijith remembers his childhood and tells Newz Hook that it was one filled with mixed emotions. He says that he was a different child who never walked or even talked properly to anyone. This worried his parents who sought medical support. A few doctors told the family that it would take time for some children to walk and talk, but this continued for a long while until one of the doctors took his biopsy and confirmed that he had SMD. So Abhijith’s diagnosis happened at the age of five and needless to say, his family was shattered.

But they decidded to empower him. Abhijith was put into a regular school. His father dropped and picked him from the school and this became a regular routine. “Doctors had told my parents that I would be bed-ridden. But my parents believed in me and tried ways to make me independent. I had difficulties with studies and treatment together. My father used to take me in his bike to school. This went on even after I grew up. But I knew it was hard for him. So I decided I would step out only when I can do it independently. I did not want to trouble them”, says Abhijith.

Almost two years, he spent inside the four walls of his home. That is when he got an electric wheelchair so that he could be independent, go wherever he wanted. Abhijith enrolled for college and pursued B.Com.

He made a lot of friends in college whom he says are with him through thick and thin. “They helped me explore many new things. Well, isn’t that what friends are for?”, asks Abhijith with a smile.

Abhijith says that he loved writing down his thoughts as poems from a very young age. But he was constantly demotivated and pulled back by peer groups who made fun of him. This had a deep impact on Abhijith who even went under depression for a while.

While talking to one his friends Sidhveeth, Abhijith broke down and told about what he feels. “He told me that if I cannot write poems, maybe I should start writing songs. I refused and after much persuasion from him, I decided to write”, remembers Abhijith.

It took him over one year to complete the Malayalam song which was titled ‘Ariyathe Vannu’. But Abhijith says he has put his heart and soul into it. Sidhveeth composed the music and even made a video which was uploaded on YouTube.

Abhijith has a handful of songs written by him which are waiting to be composed. “The lockdown has affected that too. I’am unable to carry forward with my work”, he says.

“Most of us hate hearing advices from others. But sometimes I feel that it is best to hear them if you think that can help you improve”, signs off Abhijith.