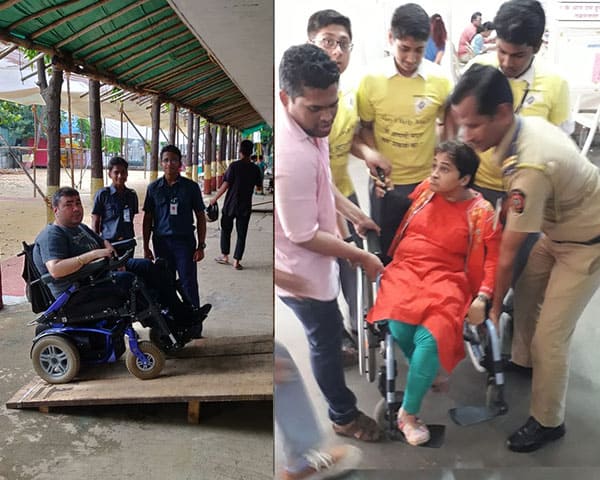 It was a mix of bouquets and brickbats as far as the Accessible Election exercise in Mumbai was concerned. The state Election Commission had undertaken many efforts to ensure that people with disabilities could vote in a hassle free manner and while they got many things right, there was criticism too.

Voting in Mumbai saw a massive turnout of people with disabilities and the feedback was mixed but largely positive. There was much praise for Maharashtra Chief Minister Devendra Fadnavis and Prime Minister Narendra Modi from social media user Voralogy, who was among the first to tweet her response. “I had tweeted about the dismal accessibility situation at the polling booth during the Union Election. Today, with my grandmother (92 years) is as a wonderful experience! Kudos”.

From placing polling stations on the ground floor in buildings with no lifts to dolis at polling stations to carry people with locomotor disabilities and tying up with wheelchair taxi service EzyMov, many measures were taken by the state election commission. Filmmaker Rustom Irani, who has been vocal about how frustrating the exercise has been in previous elections was happy with the changes evident on the ground this time round.

I had a fantastic voting experience for the first time in years and felt truly amazed as a citizen. For many years, it was a challenging experience for me as the voting centers were never accessible. This year the booth was spacious with provision of ramps and wheelchairs. The volunteers were very helpful and had been sensitized about the needs of people with disabilities. I was able to cast my vote without hassle and discomfort. I hope that such arrangements will be retained in future as well. – Rustom Irani, Filmmaker

It was not all hassle free everywhere though with disabled voters complaining of inconvenient situations. Software tester Jasmina Khanna, voted at the same polling booth where she had cast her vote in the Lok Sabha elections this year. “In the previous election there was a ramp but this time there was no ramp and no wheelchairs either. Disabled voters had to be lifted up the steps and it was very inconvenient and awkward. I could not give my feedback either as the volunteers present were students who had no idea why the ramp was not there. I am saddened by the lack of proper arrangements as it was horrible for many senior citizens who had to cast their votes on the second floor of the voting centre”.

Jasmina’s experience was echoed by Ruchita Dalal, also a wheelchair user, who shared her experience on social media. “It’s been 11 years and I am not being able to cast my vote. How are we supposed to go to the first floor without a lift? They say we will carry you. Don’t we need some dignity? Don’t we have a right to vote?”

Rajaram Ghag too was unhappy to see the same dismal arrangements in his booth in Ghatkopar West. “I am very angry as the promises made by the Election Commission and the government are not being fulfilled at the ground level and disabled voters continue to be treated with the least amount of consideration. I have been coming to the same booth for almost two decades and I find no improvement even now. The officials were not cooperative and did not let us access the complaint book either“.

Another disabled voter from Ghatkopar West Satyaprakash Tiwari blames official apathy for the poor state of affairs calling the voting exercise “a degrading and humiliating experience every time”. This was not just voiced by people in suburban Mumbai. Aadil Desai, who voted in Dadar West had similar words. “So good to see some changes but not really enough. There were no handholding bars on the side wall for the four or five steps to reach the ground floor. The steep makeshift ramp that was just a thin plywood sheet with a small piece of wood below to support it. I was made to go from one gate to the other as the two different sections did not even have the list of all voters in one place.”.

So, clearly much more needs to be done on the accessible voting front. The good news is that the report card is not all bad. These were some changes made and perhaps with consistent feedback, the Election Commission will get better.