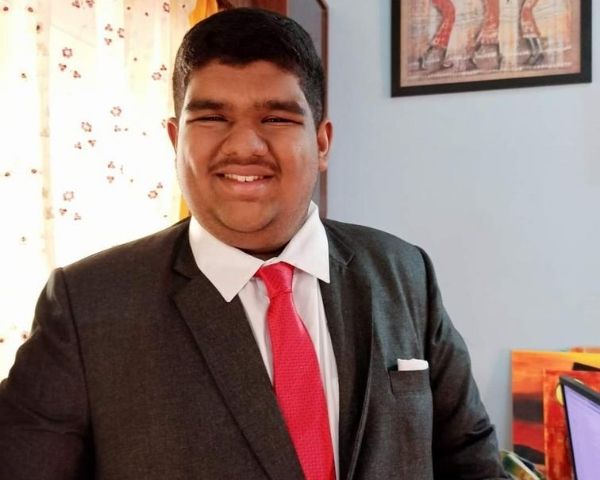 16-year-old Aditya Roy from Bengaluru scored a distinction in class 10 board exams of Karnataka state for which the results came out earlier this week. Diagnosed with autism, Aditya is indeed a go-getter. But what made attending board exams easier for him is the unending support that he received from school authorities, state disability commissioner and also the timely interference of state education minister.

The Karnataka state class 10 SSLC results were out earlier this week. In the exams that were conducted a month ago, all the students took precautions and wrote the exams amidst a pandemic. Amongst them was 16-year-old Aditya Roy from Bengaluru who cracked the exam with a high score. Diagnosed with autism a young age, Aditya got a distinction along with other regular students. Indeed an achievement, his mother Kajal Roy and Avijit Roy cannot hide their excitement. Aditya is one of the very few students with autism in the state who has scored high marks in this year’s exams.

Aditya was diagnosed with autism when he was around four years old. It came soon after his parents and teachers realized that Aditya was slow in following instructions at school where he first joined. After looking out, Kajal identified mainstream school Insight Academy as a right choice for him. That is where he was admitted.

Young Aditya is also a musical prodigy. He sings and has performed at various events too. An ardent painter, Aditya’s works have been exhibited at various platforms.

Karnataka was one of the few states where class 10 students had to write their board exams to be promoted to the next class. Most of the states were assessing students based on their internal marks, attendance and other class tests for promotions.

Kajal remembers that when his final exam dates were announced, she was tensed and worried on how her son is going to write exams amidst a pandemic. Karnataka State Education Minister S Suresh Kumar had assured all help to parents and school authorities.

“But being the mother of a special needs child, I was worried. How will my son go write the exams wearing a mask, shield and other protective gears? He has autism. Hence, chances of him being anxious and nervous are high”, says Kajal.

School authorities announced that all children must reach the exam hall one hour prior to the exam so that they can be checked thoroughly before allowing entry inside. This worried Kajal more. That is how she decided to reach out for help.

With the help of an NGO, Kajal sent a letter to state Disability Commissioner VS Basavaraju for which she got a prompt response. “Thanks to him, Aditya could attend the exams and he was less nervous. They allowed us to reach the exam hall just half an hour before. My gratitude to him and the state education minister cannot be expressed in words. They stepped up at the right time and relaxed rules for children with special needs”, says Kajal.

After passing out in flying colors, Aditya has already chosen what he wants to do next. He got admissions at the Vedant College for Pre-University (PU) and has chosen Commerce stream. His classes are yet to commence. “I must say that the way Karnataka government prepared children for class 10 exams was excellent. As a mother of a special needs child, I cannot be happier”, says Kajal.

The family cannot thank enough for the tremendous support that they received from the school principal, teachers and staffs of Insight Academy. The school rightly stands up for inclusion, something that many other schools can follow!