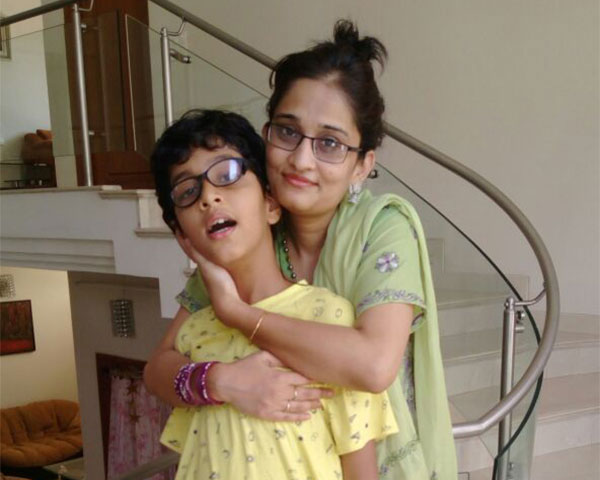 Ahmedabad-based Affan and his mom Zeba Hashmi are a great example of what teamwork can achieve. Affan, an ardent swimmer and painter, recently conducted his first painting exhibition in the city, which was widely appreciated. This mother-son duo believes in working together to aim for the stars.

A disability just means doing things a little differently. Given the right support, people with disabilities can achieve their full potential like 11-year-old Affan Hashmi has shown. A painter and swimmer, Affan has already held an exhibition of his works in Ahmedabad.

Affan believes this is just among the many talents and adventures life has to offer. Standing by him is mother Zeba Hashmi, who says she will support her son in his efforts to reach for the stars.

Affan has been diagnosed with over seven disabilities, including autism and cerebral palsy. He started having seizures after birth and doctors said he had multiple disabilities. Zeba refused to let this defeat her and decided early on to give Affan the best. He was introduced to painting when brain mapping tests showed that he had a strong affinity for art.

He is more into abstract and modern paintings now because he has fine motor skills issues. As a parent, I was always worried about what he is going to do as an adult. But now I know that he can focus on paintings. I introduced Affan to art a few months ago and he is doing great. – Zeba Hashmi, Affan’s mother

Affan also loves to swim and does well at competitive events. He won second prize at a competition held for children with disabilities in Ahmedabad. “Affan is a child who is determined to keep trying at everything. He is more inclined towards swimming, but I do not want to leave it there. I want him to explore more things”, says Zeba.

Over the last few years, Zeba has been collaborating with other parents who have children with disabilities to organise fashion shows for the kids. Affan has participated in four shows. “I walk with him because he does not understand commands and needs support”, adds Zeba. The events are done to create an awareness about disabilities and make the kids empowered. “We noticed that there is a better acceptance of disabled children nowadays. We have been organising our events at renowned clubs and hotels in Ahmedabad and they are all welcoming”.

The mother-son duo have many plans and Zeba wants to make sure Affan enjoys every bit of his journey towards empowerment.

“As I am in a corporate job, I hardly get time to monitor Affan’s daily routine”, says Affan’s father, who prefers not to be named, “but I have always tried my best to be a strong pillar of support to my family, both emotionally and financially. There is a strong visible attachment between me and Affan. Being a husband, I have always encouraged Zeba to try out new ventures for Affan because I know she will get him nothing than the best”.

Shows what a difference a supportive environment at home can make for a child with disability.

Also Read: How a diagnosis of autism led Madhura and son Rudra to unearth their hidden talents