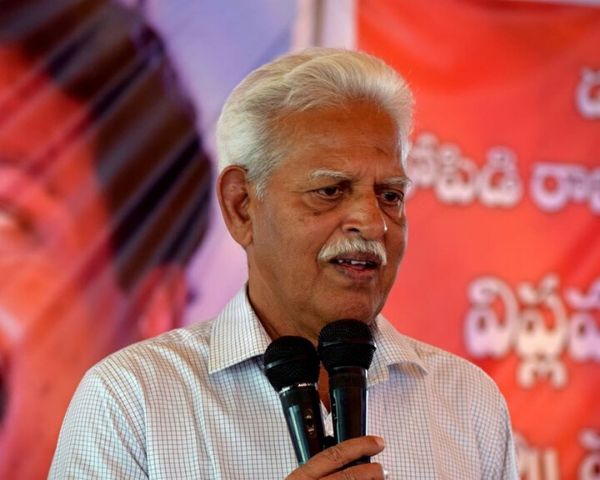 Varavara Rao, the 81-year-old poet and activist imprisoned at the Taloja Jail in Maharashtra over his alleged role in the Bhima Koregaon violence in 2018, has been taken to the JJ Hospital in Mumbai.

The decision to deny temporary medical bail to the revolutionary poet has been challenged in court by his lawyers. A fresh petition was filed, seeking medical intervention for the Telangana poet lodged in jail for nearly two years.

Varavara Rao was taken into custody under charges of instigating violence at the annual Bhima Koregaon event in 2018 and over an alleged plot to assassinate Prime Minister Narendra Modi. Though the charges remain unproven, Varavara Rao, who has a history of hypertension and heart ailments, was placed under house arrest in 2018. He was later shifted to the Taloja Jail where his health condition worsened.

Bail for Varavara Rao and the co-accused in the case, 61-year-old Shoma Sen, was rejected twice.

The latest petition sought directions to the concerned authorities from the court to send Varavara Rao for an immediate medical check-up to any private hospital at his own expense. Varavara Rao was admitted to JJ Hospital on May 28 for treatment after losing consciousness in jail. Though the hospital had suggested to the jail authorities to provide treatment for Rao, treatment was cut short and the poet was taken back to jail..

Family members of the poet had expressed concerns over the health of the 81-year-old after he reportedly sounded delirious over the phone to his family on Saturday.

On Sunday, Romila Thapar and four other Supreme Court petitioners in the Bhima Koregaon case wrote to the Maharashtra government and the National Investigation Agency (NIA) to facilitate the immediate transfer of Varavara Rao to JJ Hospital for proper treatment.