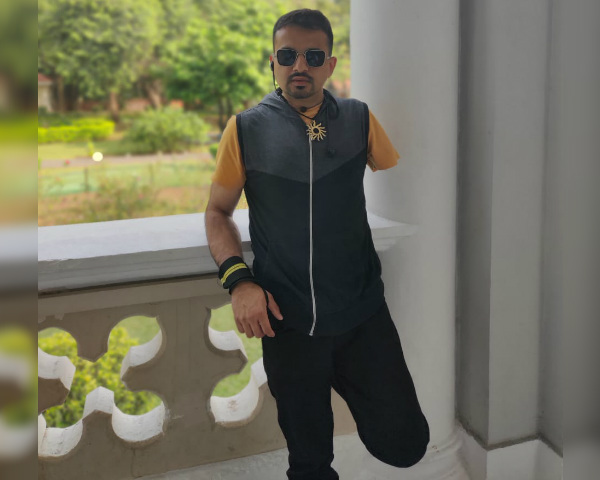 34 year old Akash Gokarn from Mumbai is an amputee who works with a leading bank as the assistant manager. Akash says that his true calling is dance. He has been an ardent dancer since childhood and is still pursuing it. He has performed at various venues. Currently, he is associated with DRZYA, an organisation that empowers disabled people through arts. Akash’s journey is all about determination and hard-work.

For 34 year old Akash Gokarn, life has been a roller coaster ride. But he has made the best out of it. Akash became an amputee owing to an infection on his limb during childhood. But this youngster has beaten all odds to emerge successful. He has made his mark in the society through hard-work, courage and determination. Today, he works as the assistant manager with the leading Union Bank of India in Mumbai. Akash is a passionate dancer too. In spite of his busy schedule, he makes sure to chase his passions and dreams.

Akash was born and brought up in Mumbai. His parents ensured to give him the best education. They tried to enroll him into a prominent English medium school in the city. But they denied Akash admissions stating that he had a disability. Akash did not have an option but to join a Marathi medium school.

I’am glad that I studied in a Marathi medium school because they are very inclusive. I got the best education there. I do not want to name the school that denied me admissions. But it is quite disheartening that mainstream schools deny is admission owing to a disability. The colleges where I completed my higher studies were also inclusive – Akash Gokarn, Banker

Akash completed his under-graduation in commerce. He later went on to take an MBA, both from reputed colleges in Mumbai. While at college, Akash used to become part of dance shows. Since childhood, he loved dancing and he believed that dance did wonders to him. So it did! He participated in many inter-college festivals and started winning prizes back-to-back.

“Getting into a dance group in college was definitely not easy. There were many talented people. So it was all about proving myself and my talents. That was important to me. Initially, my choreographer was scared if I can do it and whether the judges would minus my marks. But my dance was appreciated at many platforms. I started leading dance troupes at college”, says Akash.

This youngster says that one of the most cherished moments for him were at the prominent IIT Powai’s Mood Indigo cultural fest. “I’am glad I could be part of it. There was no looking back since then”, he says.

Mumbai based Geeta Poduval started DRZYA to empower people with disabilities through art. Akash has been a part of DRZYA since the past few years. He says that being a part of the venture gave him a new lease of life. It helped him to start chasing his passion for dance, yet again. “Geeta Mam gave me a whole new life through DRZYA. Dance is like oxygen to me. Being a part of DRZYA has helped me change my attitude towards many things. I thoroughly enjoy being a part of this”, he says.

Akash has many plans for the future. He has been working at the bank for nearly two years now. So he has a packed schedule. But that does not stop him from dancing to his heart’s fill. “You have to keep proving and improving. People think that because I’am disabled I must go for a desk job. But I have taken up marketing where there is a lot of travel and people involved. I have won awards at work too”, he says.

Geeta Poduval sees immense talent in Akash. “He is a dedicated, focussed and hard-working youngster. As a human being, he is very gentle and extremely caring. Undoubtedly, he is one of my favourite persons.  I’am yet to come across someone like him. Akash deserves to be celebrated and spoken about”, she says.