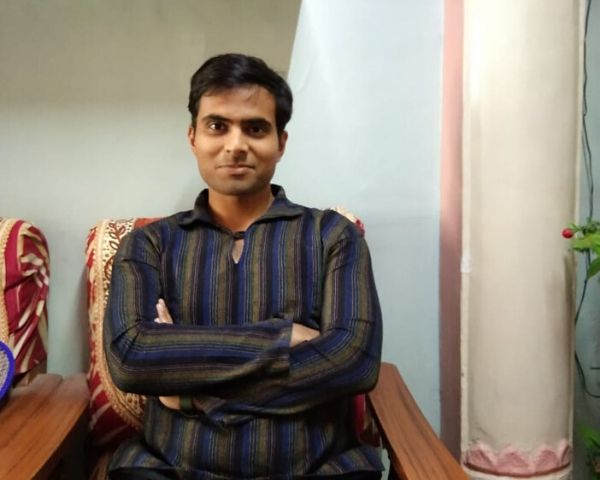 In My Take this week, we have 28 year old Akshay Bhatnagar from Jaipur. Akshay, who is an all-rounder, was diagnosed with autism at a young age. He is Rajasthan’s first person with autism to get admission to a mainstream college. Akshay is also amongst the first person with the disability in the state to pass a competitive exam with other regular students to get a job as a government employee.

When I was born in the year 1992, my parents were excited. But gradually, they started noticing some behavioral changes in me. I did not mix with other children of my age. Instead, I preferred total isolation.

In the year 1996, I attended a play school with other regular children. I was there for a month because I just couldn’t cope up with the school or other students. My sister was also there in the same school along with me. But still, things were hard. My parents also decided to get clinical help at that same time.

The school principal advised my parents that they must get me admitted in a special school due to my behavioral issues. That came as a huge shock to them. My speech was not developed and I was constantly frustrated too.

My parents consulted many doctors. But that did not help since no one could identify what went wrong. It was after consultation with a leading speech therapist in Jaipur that I was diagnosed with autism. I got early intervention and that did help me a lot.

The next struggle in my life was to get admission into a good school. None of the schools gave me admission because I had special needs. The State Bank of India Officers Association had started a new school in the city during that time. They admitted me whole-heartedly. I pursued class 1 to 12 in that school.

Academics was not easy for me. I had my struggles. But the school principal supported me through all odds. Even when parents of other children and the management discriminated me, the principal stood by me. There were many students in the class and I couldn’t get individual attention. So my mother Pratibha Bhatnagar helped me study. “I feel that normal schooling did help me a lot. I got the opportunity to mix with other kids”.

Getting admission into colleges was equally tough. All the colleges denied admission to me due to my disability. So I approached the state disability commissioner and finally got admitted to a college. I pursued my under-graduation in Political Science, Public Administration and Sociology. I was the first person with autism in Rajasthan to get admission into a mainstream college.

Simultaneously, I leant computer and short-hand too.

In the year 2015, I filed a petition in Rajasthan High Court for reservation of autism in the disability act. My efforts did bear fruits. The latest Rights of Persons with Disabilities Act, 2016 has included autism in it.

Currently, I’am working at the Rajasthan University as a Junior Assistant Clark. This was like a dream come true for me because I always aspired for a government job. I wrote the competitive exam with regular students and became the first person with autism in Rajasthan to get a government job.

Ever since a young age, I was interested in sports, especially shot-put. I have represented my state at many events and won prizes too. Recently, I won gold for Rajasthan at a sports event held in February.

I love trying my hand in other sports too. It is fun for me.

“I believe nothing is impossible if you are determined to achieve what we want. I have faced many odds and obstacles in my life. But that only made me emerge out more successful”.