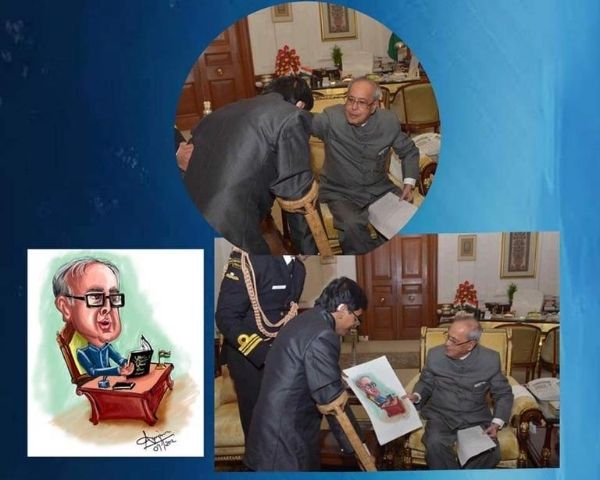 Anjan Satish, a Kochi-based artist, met the late President of India Pranab Mukherjee at an awards function in Delhi in 2015. Anjan recalls heart-warming moments spent with the former president and says that he was a gentle, warm and welcoming man who will truly be missed.

32-year-old artist Anjan Satish needs no introduction to art-lovers. In spite of multiple disabilities, this youngster has made his mark in the art world, especially as a cartoonist. Anjan, based in Kochi, has completed hundreds of works and drawn beautiful cartoons of renowned personalities for which he was applauded at many platforms. Anjan was lucky to have met former president Pranab Mukherjee who passed away earlier this week. He recalled the lovely moments spent with Mukherjee and says that the late President was indeed gem of a person.

It was in the year 2015 that Anjan received the national award for ‘Most outstanding creative adult with a disability’ at an event held on 3 December at New Delhi. Since the Prime Minister was in Chennai visiting flood-affected areas, the award was handed over to Anjan by former Union minister Arun Jaitley. That was one of Anjan’s unforgettable trips to the national capital. He got the opportunity to visit the ‘Rashtrapati Bhavan’ and also got to spend time with President Pranab Mukherjee, a true honor to any Indian!

Anjan was accompanied by both his parents, Kerala Cartoon Academy Secretary Sudheer Nath and cartoonist Unnikrishnan.

A warm, welcoming human being

Mukherjee is known to be a wise, warm and welcoming person who has taken India to many international platforms. Anjan was indeed lucky to have experienced that warmth.

“I handed him a small note in which I had written about the difficulties faced by kids with disabilities. He was such a gentle person”, says Anjan.

In fact, Anjan and all those who accompanied him was given a tour of the ‘Rashtrapati Bhavan’ as per instruction of Mukherjee. “They took us to places which were not open to the public”, says Anjan’s father Satish.

Anjan says that he felt extremely close to one of India’s most loved and respected President. Anjan, who has also met late President APJ Abdul Kalam says that he is indeed lucky to have met both revolutionary personalities.

“It is because we were Anjan’s parents that we could meet President Mukherjee. Spending time with him was indeed one of the most unforgettable moments in not just Anjan’s life, but our lives as well”, says Satish.