Portraits of actors & beautiful landscapes, Ashwin Sreekumar’s art works are a treat to the eyes! 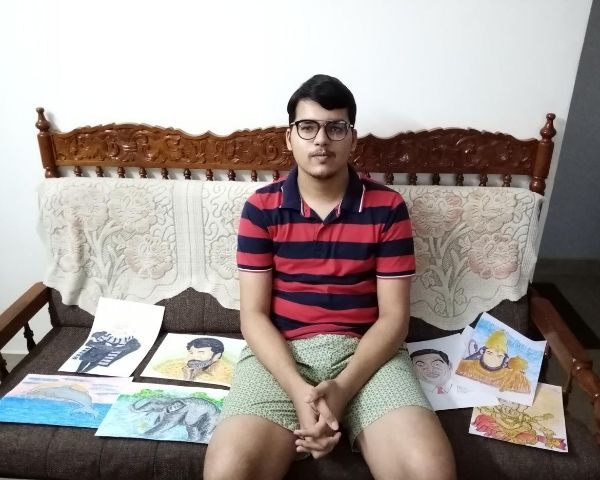 Ashwin Sreekumar, 22 years old, is an artist from Kochi who has done over 100 works. He was diagnosed with low vision and a learning disability at a young age. In spite of all the physical limitations, Ashwin’s love for art remains intact. He even hopes to build a career in it.

Step into 22-year-old Ashwin Sreekumar’s room and you wouldn’t miss the amazing sketches of Malayalam actors Mammooty, Mohanlal and of course his favorite Mr.Bean. This youngster who hails from Kochi is an artist with a learning disability and low vision. At a very young age, he was diagnosed with eye problems due to which his vision was affected. In spite of multiple disabilities, Ashwin draws and paints beautifully. In fact, he proves that a disability is no barrier to follow your heart.

Since a very young age, Ashwin had eye problems. Initially, his parents thought that it would go off as many children have health issues. When he reached the age of five, the problem still persisted. That is when they decided to consult him to a pediatrician who said that he needs better eye diagnosis. They soon found out that he has low eye sight. Within no time, he was also diagnosed with a learning disability.

The family was living in Thrissur at that time. They learnt that there were better treatment facilities for Ashwin in Kochi and they shifted to the city. Though he was admitted to a mainstream school, it was tough for him. “Other kids kept bullying him and he would also react when that happened. Physical fights and quarrels became common. So we decided to change his school”, says father Sreekumar.

After changing schools, Ashwin joined Smriti Special School in Kochi two years back. He is happy there and loves to attend classes. His teachers motivates Ashwin to experiment with his skills. Though his learning disability is quite a challenge, Ashwin overcomes that in his own ways.

Today, he can manage to do things independently. A passionate body-builder, Ashwin used to go the gym regularly but stopped now due to Covid spread.

“Ever since I can remember, I have been drawing and painting. I love doing it”, says Ashwin with a smile on his face.

Sreekumar says that his son used to draw on anything that is in front of him, be it a newspaper or notepad. “He loves drawing elephants. Over the years, he has drawn elephants differently. All of them are unique and lovely. But it all depends on his mood”, adds Sreekumar.

Over 100 works to his credit, Ashwin’s family hopes that he can build a career in art. He has also won many prizes for competitions and is looking forward for more.

Sreekumar tried admission for Ashwin at a renowned arts college in Thripunithura, close to their home. But they refused saying that he should complete academics to be part of the college. An opportunity was clearly denied to this youngster,

“I believe in supporting my son in whatever he likes to do. When he was diagnosed, we were not fully aware of the condition. Right now, we believe that it is all about reaching out to him”, says Sreekumar adding that Ashwin has a great humor sense too!

Nothing can bring down the spirits of this young man, thanks to his unending love for art and a supportive family too.