Australian YouTube star Elijah is challenging stereotypes about Down syndrome 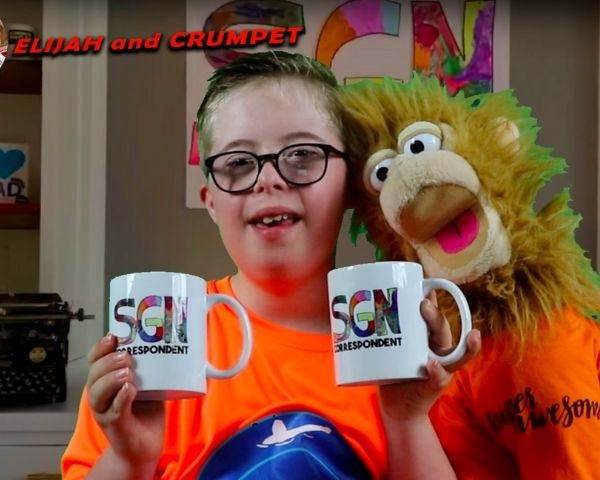 Get-hooked March 20, 2021
3
Eleven-year-old Elijah from Australia has become a prominent ambassador for Down syndrome awareness around the world. Elijah had his own YouTube channel by age nine, has appeared on leading Australian TV networks and has an international following. Now he is looking forward to his first book ‘Motivate Man’ which is in the final stages of being published.

He is adorable, playful, and cuddly and just loves the camera. No wonder Australian YouTube star Elijah is winning audiences around the globe with his channel Elijah and Crumpet.

Starting a YouTube channel seemed like an inevitable step, says dad Rob, given how natural Elijah has always been in front of the camera. Rob plays the part of the puppet Crumpet, who guides Elijah and is a part of all his learnings and adventures. The idea of having Crumpet as a partner was inspired by a monkey puppet Elijah’s mother, Virginia, used to encourage him to learn words and sounds.

When told that their baby had Down syndrome, Elijah’s parents were relieved that it was not a life-threatening condition. “We got as much information as we could and were really looking forward to welcoming this little baby into our lives”, says Rob. “We spoke with people who had experience of Down syndrome and used every available means to become as knowledgeable as possible. As Elijah grew we went through the therapy sessions and additional appointments, knowing that we had to give Elijah every opportunity to be successful”.

A natural on camera

Elijah’s mom chose to devote her time to focussing on his early development, as she had done with his older brother. This, coupled with love and attention, playing, singing, dancing, and having fun influenced him in a positive way.

“What we did soon realize very early on was that inclusive education was important to us”, says Rob. “It became our goal to have Elijah attend a regular school like his big brother Thomas, who is five years older. We attended a Social Role Valorisation (SRV) course which cemented our high ambitions for Elijah, including becoming a Scout, being a school and even university student, being a reader, a musician and a speaker of a foreign language, plus ultimately having a job”.

We require him to use his memory a lot, not just for learning Japanese, for example, but to remember what we are aiming to do in the show and then say the things that we need to, often using a script. Elijah has been encouraged to be creative and use his sense of humour to entertain others, so he has learned how to act with Crumpet as his co-host to achieve this effect. Watching the videos afterwards reinforced this from early on as Elijah was able to see the results of his efforts. – Rob, Elijah’s father

The content of the channel is decided based on what interests Elijah or recent events.

“If Elijah is interested in a topic, then that might be the inspiration. If something has happened recently during the week, I might say, “We should make a video about that!” and then we discuss it and Elijah is then motivated to do it. Sometimes he declares that we are going to make a video about something, so we run with that. Then if we have a series, such as travel, Australian animals, learning Japanese, or more recently Some Good News, we will do multiple shows around those topics.”

Apart from the mainstream press coverage, the YouTube channel has triggered some amazing opportunities, like meeting actor Hugh Jackman. Elijah also got the opportunity to engage with his new school and class before he arrived. “The teacher was able to discuss Down syndrome and then show a video of Elijah, so they were all very excited that a YouTuber with Down syndrome was coming into their class!!”, says Rob.

As for Elijah, his current future plan is to start his own business.

“Elijah will tell you nowadays that he wants to have a café called Elijah’s Invention Café, where he can serve tea, coffee and food, including cake!”, says Rob, adding that having his own business makes sense, since this would be a great advocacy opportunity. Given his strong communication skills and attractive personality, we believe this is something Elijah will surely excel at.