MIFF 2020 gives a platform to young filmmakers with intellectual disabilities 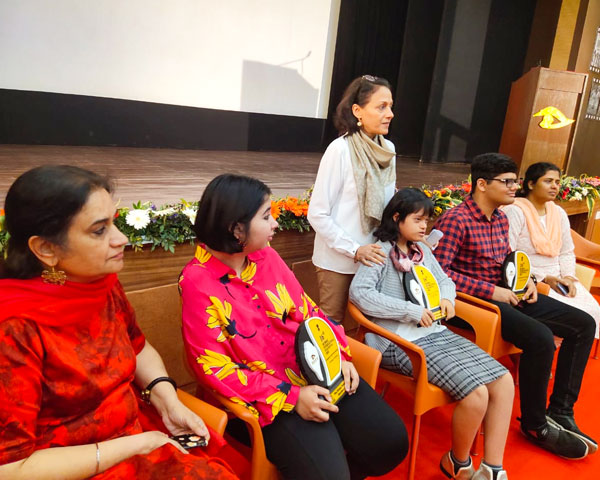 Global warming, pollution, family relationships, and Swachch Bharat campaign – these were the varied themes that three young filmmakers with intellectual disabilities chose to focus on in their debut films which screened at the Mumbai International Film Festival (MIFF) 2020.

MIFF 2020, which ends today, has made history by offering a platform for the first time to aspiring filmmakers with intellectual disabilities. The youngsters are Pranavi Sethi, Usaid Shaikh, and Gayatri Gupta. Collaborating with Gayatri on her film was communication designer Ayushi Gaur. The aim being to show how inclusion in the filmmaking space is possible and leads to great results.

The name of my film is True Happiness and the theme is about what makes me happy. I felt very happy to see my film on the big screen. When my film was being screened, I turned and made eye contact with my mom and saw the happiness in her eyes. It made me feel very proud of myself. Everyone congratulated me and praised my work. It made me feel very pleased and also made me feel more confident. – Usaid Shaikh, Aspiring filmmaker The filmmakers were trained last year by Ajmal Jami, a national award-winning photojournalist and documentary filmmaker. Called Smart Phone Film Making’ for Special Young Adults, the course was held at the Indian Institute of Mass Communication in New Delhi.

“I have been doing workshops for the Film and Television Institute of India (FTII) on smart phone filmmaking and digital cinematography”, says Jami to NewzHook. “This was the first time I was working with youth with disabilities and was a bit unsure how to go about it”. A parent of a child in the group, Shalini Gupta, gave Jami a broad sense and he worked out a rough methodology that included ways to communicate the basics of filmmaking.

Understanding the basics of filmmaking

The 10-day training was done in two parts. “The first five days was focused on shooting techniques”, says Jami. “This included the language of shots, how to structure using shots and learning to see the world around in shots”. The second half was dedicated to stories and structuring them in images and sounds.

The films offer a glimpse into the interesting ways these youngsters look at the world. “Some of their faculties are even more attuned”, says Jami. One of the filmmakers Gayatri Gupta is a gifted artist and wanted to make a film with fish swimming and birds flying. “We thought about it and said decided to make an animation film. Gayatri did the painting and the artwork”, explains Jami. The end result is a short animation film on how pollution affects the environment.

Gayatri’s mother Shalini Gupta thanks MIFF for giving these young filmmakers an opportunity to showcase their work. She is confident this will attract more youth with intellectual disabilities to explore the art of filmmaking.

“The training they went through helped them understand the interplay of audio and visual aspects”, says Gupta, who is the founder of The Art Sanctuary, an NGO that works for people with disabilities. “Skills sets and new passions were built, and we have come with nine films. These kids have thought of the idea themselves and the concept and scripting is all theirs. They have put the whole thing together”.

Fatima Shaikh says her son Usaid feels more confident after the exposure at MIFF 2020. He now plans to make a film on his friends and friendship. “Our kids got a platform and it feels good”, she says. “We never imagined our children’s films would have been screened at the MIFF. To see their creations onscreen and the audience reactions was amazing”.

“All they want is acceptance of them as ‘similar’ to everyone else”, says Gupta. “They experience happiness through achievements in areas like dancing, singing, painting, etc. just like all of us”.