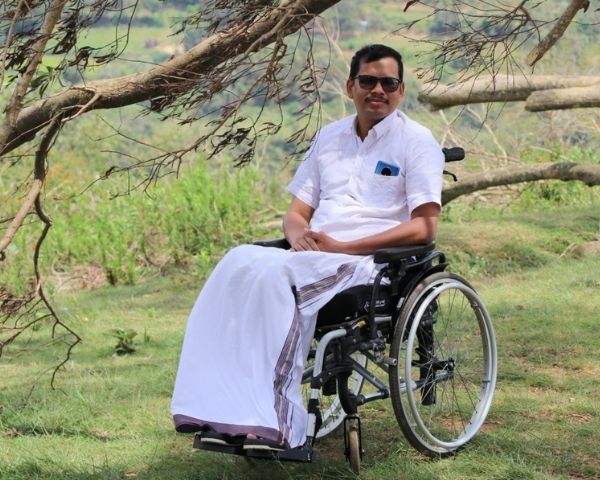 43-year-old Badaruzaman is a wheelchair user who hails from Malappuram in Kerala. In ‘My Take’ this week, Badaruzaman talks about his many travels, vlogging, graphic designing and passion for social work. Badaruzaman doesn’t let a disability stop him from doing what he loves.

I was born and brought up in a small town at Malappuram in Kerala. I completed my class 10 and started searching for jobs. That is how I moved to the Gulf.

It was in the year 2003. I met with a car accident there due to which I had a spinal cord injury. I had also gotten married by then. So I returned back to Kerala and underwent treatments and therapies for over six years. I hoped my condition would get cured. I did not know that it was a life-long injury. But gradually I realized it. Hospitals and some doctors were exploiting me in the name of providing cure.

I started attending camps where disabled people were also part of. During that time I met many people like me who had accidents due to which they had to become wheelchair users. I wanted to do something for them. Thus, I became full-fledged in social work which I believe is my true calling.

I also became part of social media from where I could connect with many people from across the world. That helped me too.

A few years back, we started a group for wheelchair travel enthusiasts called ‘Kombans’. The sole idea behind starting this was to make sure that people on wheelchairs step outdoors and travel as much as they want. We plan trips with wheelchair users who have three-wheeler scooters so that they can take their wheelchairs on their scooters itself. We have already visited places like Ootty.

“Nothing is impossible for wheelchair users, not even travelling. That is the message that we wanted to bring out by starting ‘Kombans’. We have volunteers who help us because most public places aren’t wheelchair accessible”.

I’am also the Malappuram Secretary and state Vice-President for the All Kerala Wheelchair Rights Federation (AKWRF).

Standing with me throughout my journey is wife Muneera, parents and siblings. Muneera knows to drive. So she is the one who drives me around everywhere. We travel together.

I’am also active in vlogging and has my own YouTube channel where I review wheelchairs and talks about them. Mostly, my videos are about wheelchair discussions and technicalities associated with it. I started it two years back and has done over 30 videos.

I learnt graphic designing after my disability. Now, I teach it to other wheelchair users for free. I also work for the share market.

“People are going to point out things that you cannot do. Most of them wants to hold you back. But it is your duty to move on and do what your heart says. Always try to be independent so that you don’t have to rely on anyone”.