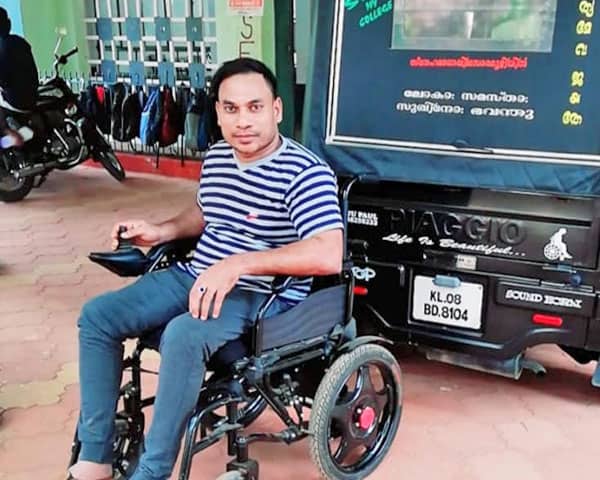 Biju Paul from Thrissur met with an accident almost 16 years back. This affected Biju’s spinal cord and he has been a wheelchair user ever since. Biju could not complete his class 10 or pre-degree but he always aspired to become a lawyer. Biju recently passed entrance exams and got admission into a prestigious law college in Thrissur but he has been barred by the Bar Council of India, a move that Biju has challenged.

“You cannot swim for new horizons until you have courage to lose sight of the shore”. This quote can be aptly used for the courage and determination of 44-year-old Biju Paul, a wheelchair user from Thrissur, a small town in Kerala. Determination to chase his dreams is what pushed him ahead in life.

However, his aspirations have met with a major setback. A few months back, when Biju started attending the prestigious Government Law College in Thrissur, the Bar Council of India intervened and called off his studies stating that he was not qualified enough. Biju has now legally challenged this.

Biju was 23 years old when he met with an accident. He was in class 10 at the time. He could not stuyd further due to financial constraints and he was also bedridden for over 16 years. He couldn’t complete his pre-degree course, but his dreams of studying law remained alive. Biju went on to write an open entrance exam and became eligible for higher studies. He joined a postgraduate course at Calicut University and went on to pass the entrance exams of Government Law College successfully.

I was studying there for over a month when the Bar Council of India said that they cannot allow me to study any further because I do not have a class 10 and pre-degree certificate. They cancelled my admissions. I have given a writ petition with the High Court of Kerala and is waiting for justice. I have many physical limitations. But I have told to myself that I shall beat all obstacles to become a lawyer. – Biju Paul

A few years back, a similar case was fought in the Bombay High Court where the petitioner, who did not complete his class 10 and pre-degree courses was allowed to pursue law. Biju is hoping for a similarly positive outcome. “I am hopeful that the Kerala High Court will also rule a judgement in favour of me. Ever since a young age, I aspired to become a lawyer. But kept my dreams aside due to my disability”. /p>

Biju, who comes from an economically backward family, is facing many struggles to make ends meet and study. He drives a rickshaw to his college as he cannot afford any other means of transport. “Attending a college as a disabled person is not easy as most campuses are not accessible”. Such experiences have fuelled his desire to be a lawyer. “I want to become a lawyer so that I can raise such concerns for the disabled community”.

In spite of the introduction of the Rights of Persons with Disabilities Act, 2016, there are hundreds of disabled people like Biju struggling to access basic rights to education. Ashla Rani, a disability rights leader from Trivandrum, has been reaching out to Biju and offering him all the help. “Biju’s grit and determination to become a lawyer, in spite of all the odds, is very inspiring. That is why I decided to help him out in all possible ways. I also feel that it is our social responsibility to help someone like him who is determined to chase his goals”.

Qualities that the court will hopefully recognise in Biju and grant him justice.

Also Read: Strong-willed & determined, Albin Joseph is hopeful of pursuing his dreams of becoming a doctor