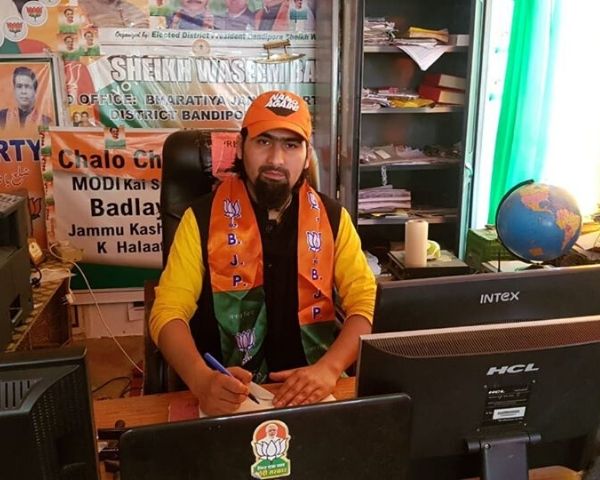 BJP leader Sheikh Wasim, his father and brother were shot dead by terrorists at Bandipore in Jammu and Kashmir. Prime Minister Narendra Modi who sought details about the cold-blooded murders over phone has expressed his condolences to the family. The incident has sparked outrage, mainly regarding why no security cover was provided to Wasim.

Over the telephone, PM @narendramodi enquired about the gruesome killing of Wasim Bari. He also extended condolences to the family of Wasim- Dr Jitendra Singh, Union Minister.

The incident happened on Wednesday night at 9 pm when Sheikh and his family members were sitting outside a shop near the local police station. The terrorists who came in bikes shot all the three of them who died on the spot. They were taken to a nearby hospital, but was pronounced dead due to gun shot wounds on their heads.

“#Terrorists fired upon BJP worker Wasim Bari at #Bandipora. During indiscrimnate firing Wasim Bari, his father Bashir Ahmad and his brother Umer Bashir got injured and shifted to hospital but unfortunately all the three #succumbed to their injuries. @JmuKmrPolice”, tweeted Jammu and Kashmir Police.

Reportedly, Wasim was provided with ten security personals for his safety, but none of them were present during the attack. The guards have been arrested and an investigation has also begun.

Many prominent leaders took to social media to express their shock and share condolences.

We lost Sheikh Waseem Bari,his father & brother in Bandipora, J&K today in a cowardly attack on them.This is a huge loss for the party. My deepest condolences are with the family.The entire Party stands with the bereaved family. I assure that their sacrifice will not go in vain”, tweeted BJP President JP Nadda.

“Sorry to hear about the murderous terror attack on the BJP functionaries & their father in Bandipore earlier this evening. I condemn the attack. My condolences to their families in this time of grief. Sadly the violent targeting of mainstream political workers continues unabated”, tweeted former J&K Chief Minister Omar Abdullah.